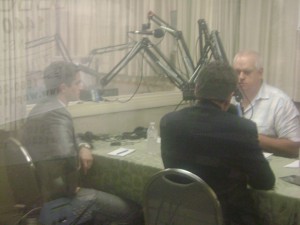 The event took place at the studio of WNPV 1440 AM, a radio station in Montgomery County just outside the district line.

Rep. Fitzpatrick started right out of the gun identifying himself as “the candidate who’s lived in this district my entire life” in contrast to Strouse who was born in Delaware County and resided in D.C. while working for the CIA Counter-Terrorism Center.

The GOP Representative also established early on his intention to nationalize the race and the conversation by taking on President Obama.

“There’s a growing sense that the President has our country heading in the wrong direction,” Fitzpatrick stated.

He also took a shot at Strouse for being recruited by the DCCC to run in the race.

Strouse referred to his personal background, including his service in the Afghanistan and Iraq Wars.

“Throughout my professional career I’ve also put country and community ahead of myself,” Strouse began.

The debate started off on the topic of Ebola and host Darryl Berger asked the Congressman whether the government was doing enough.

“We’re not doing enough,” he answered. “This is another crisis, this international health crisis that has come to our country, where the President has been slow to react.”

Strouse countered by mentioning the fact that the country currently doesn’t have a Surgeon General because Republicans oppose the President’s nominee.

Rep. Fitzpatrick again picked a fight over Strouse’s contention that it would not be “feasible” to stop transportation from West Africa to the United States.

Berger then questioned Strouse about the Affordable Care Act, or as it has become more widely known, “Obamacare”.

Rep. Fitzpatrick countered that many of those 52 votes concerned specific pieces of the legislation and, in what would become a familiar refrain, blamed Senate Majority Leader Harry Reid for not acting.

The Congressman went on to press his opponent about the medical device tax and accused him of dodging the question.

The forum transitioned to the issues with the Department of Veteran Affairs.

Fitzpatrick spoke of his work concerning the VA. He contended that the VA worked better during his first term (under a Republican Administration) than during his second tenure.

“That’s a unique view of history,” Strouse responded, recalling problems in 2002 and 2003 and going back even to the issues Vietnam veterans have faced.

“People ask me all the time can one person make a difference? And I say absolutely,” the Democratic nominee answered when asked how he’d fix Congress.

Strouse went on to reference his work in the CIA where he gained bureaucratic experience and learned how to get things done in a complex environment.

He went on to mention that NJ-3 Democratic nominee Aimee Belgard cited him as an example of a Republican lawmaker that she would reach out to.

After Berger asked about his previous comments on the Senate, Fitzpatrick doubled down on his attacks on Harry Reid and President Obama.

“The President loves to give these speeches about a do-nothing Congress and right out of the President’s playbook, my opponent says the same thing,” the Representative said in an attempt to tie Strouse to the President.

Berger then asked Strouse what he would say to an independent voter who wasn’t happy with the Obama Administration.

“I’m amused that I’m being positioned as some grand champion of the President or of the Senate,” Strouse answered. “Frankly, I don’t really care who’s at fault. What I do care about is getting results and starting to move the country forward again. Because we’ve passed a number of bills in the past number of years, but none of them are getting to the fundamental issues facing this country, the shrinking middle class.”

The Congressman again made the suggestion that Strouse was recruited by leading Democrats to run in the race.

“The notion that Nancy Pelosi waltzed into the Central Intelligence Agency to get me to run is absurd,” Strouse countered.

The next topic concerned the economy and how the district and country could best emerge from the recession.

Strouse laid out the three pillars of his economic plan: 1. Education 2. Infrastructure 3. Simplifying the Tax Code.

“A lot of platitudes, not a lot of specifics in the plan on the economy,” Fitzpatrick said of Strouse’s answer.

He also took offense at Strouse’s shot at him for voting to cut Pell Grants.

The debate ended on the topic of ISIS and foreign policy.

The first query went to the ex-Army Ranger who broke up his answer into two parts. Strouse supported the President’s actions in Iraq but expressed concerns about the President’s track record in Syria.

The Republican nominee attacked Strouse for supporting the President’s decision to not keep a presence in Iraq. Strouse countered that the Iraqi government pushed the U.S. out. Fitzpatrick decried the President’s lack of “decisiveness” in foreign policy matters.

In his closing statement, Kevin Strouse called for “sound investments” that would build up the middle class. He called the alternative (aka Congressman Fitzpatrick) “two more years of the same.”

Representative Fitzpatrick cited his track record and history in Bucks County and his bipartisan work with the group No Labels.

Altogether, Congressman Fitzpatrick was surprisingly aggressive. The incumbent is generally a low-key individual so his constant jabs at his opponent were an intriguing change of pace. Clearly he was trying to knock Strouse off his game.

Meanwhile, though both candidates prominently touted their own work, Rep. Fitzpatrick consistently tied Strouse to national Democrats while his opponent was unable to respond in kind.

For example, President Obama’s name came up several times during the debate but Governor Corbett, whose facing a difficult re-election run and who the Strouse team is trying to tie to Fitzpatrick, wasn’t mentioned at all.

It was clear that the Congressman has more experience in this arena but the challenger has two more opportunities to respond.