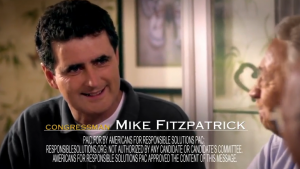 Rep. Mike Fitzpatrick is getting some help from a former Congressional colleague.

The Americans for Responsible Solutions PAC (ARS PAC) is releasing a new ad in support of Fitzpatrick as well as a poll that shows him favored to win re-election.

ARS PAC is run by former Rep. Gabrielle Giffords (D-AZ) and her husband NASA astronaut Mark Kelly. The organization was set up after Giffords was famously seriously wounded by an assassin in January 2011.

The group endorsed Fitzpatrick back in June and had previously indicated it would mobilize to support those candidates it backed.

“Congressman Mike Fitzpatrick isn’t afraid to lead,” the narrator of the commercial asserts. “He’s working with Democrats and Republicans to keep us safe from gun violence.”

The thirty-second spot praises Fitzpatrick for authoring a bill to keep guns out of the hands of the mental ill (H.R. 329) as well as co-sponsoring a bill an act to prevent stalkers and domestic abusers from purchasing firearms (H.R. 1565).

“We can get it right,” the narrator concludes. “It just takes a leader. Like Mike Fitzpatrick.”

“We need more bipartisan leaders like Mike Fitzpatrick in Congress – leaders who aren’t afraid to stand up to powerful special interests and to stand up for commonsense solutions to gun violence,” said Hayley Zachary, Executive Director of Americans for Responsible Solutions. ”By reaching across the aisle to cosponsor legislation to close loopholes on gun sales, Congressman Fitzpatrick was not only showing some leadership, but reflecting the reasonable views of his constituents.”

ARS PAC also explained that this is a six-figure buy that will air in the Philadelphia TV market on broadcast and cable for at least the next two weeks.

In addition to the ad, the organization also conducted a poll of the race, the first publicly-released survey so far.

They found Fitzpatrick leading Democratic opponent Kevin Strouse by a 60%-30% margin. Among voters with knowledge of both candidates, however, the incumbent’s lead shrinks to 57%-32%. Just 40% of respondents were aware of both candidates, a number that is likely to increase as Strouse has just started airing his own campaign spot.

Among the other results found by the ARS PAC poll are:

Now, there are several large caveats that should be taken into consideration when reading the results of this poll.

Any survey conducted by an interest group should receive increased scrutiny. For instance, the PAC didn’t release the wording of the questions that they asked respondents or the demographic crosstabs. Also, the narrow lead for Tom Wolf in a competitive congressional district contrasts with his large statewide advantage. Finally, it could be argued it is in the group’s interest to produce results that show the candidate they are supporting is doing well.

Not surprisingly, the Strouse campaign isn’t buying the poll results.

“Republican pollsters don’t exactly have a good track record over the past few cycles,” Strouse Campaign Manager Brendan McPhillips said. “American Viewpoint–the Republican firm used in this poll–is no different. One only needs to see that they have Corbett trailing Wolf by only 3 points here when he is down 25 points statewide as proof of how ludicrous this poll is. To say that this poll is a joke would be a generous statement.”

McPhillips went on to dispute Fitzpatrick’s record and laid out his own candidate’s views on gun control.

“It’s unfortunate that Americans for Responsible Solutions would be misled into supporting an empty suit who has played gun violence prevention advocates by casually attaching his name to a bill that he didn’t lift a finger to even get a committee hearing on, let alone a vote,” McPhillips continued.

“Kevin Strouse would be a strong advocate for comprehensive background checks and improving our mental health system to prevent tragedies like the ones that occurred in Arizona and Sandy Hook. Kevin also believes that leadership means more than offering empty words followed by no meaningful action, and it is shameful that this dysfunctional Republican Congress was unable to make progress on an issue supported by 90% of Americans.”