PA-8: Naughton Bets It All on the River 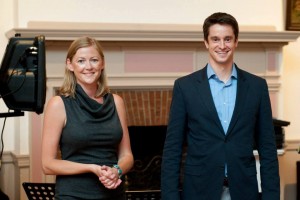 As the competitive PA-8 Democratic primary winds down, Shaughnessy Naughton is putting much of her capital in the issue of natural gas drilling in the Delaware River basin.

With just a week to go, the Naughton campaign is releasing a new ad, titled “Protecting the Delaware.”

The first half of the 30-second spot is made up of footage from the web video the campaign released last week, while the second half goes after her opponent Kevin Strouse on the subject of fracking.

“Raised here, she knows the importance of protecting the Delaware,” the narrator states. “Kevin Strouse has taken thousands from the gas industry and backs Corbett’s drilling plan, threatening our water.”

The commercial is merely one part of a larger effort to hammer Strouse on an issue the Naughton campaign believes can carry them to victory. As part of this initiative, the campaign invited reporters to speak with the candidate on the eve of the spot’s debut.

Before getting to the interview, though, it is necessary to take a look at the history of this race and at the efforts of the Naughton campaign to make natural gas drilling such a central issue.

In a way, this was always destined to be a major sticking point in this campaign. Naughton, a scientist and chemist, would undoubtedly see this issue in a different lense than Strouse, an ex-Army Ranger and CIA Counter-terrorism expert. Not to mention the fact both campaign offices reside on Mill Street in Bristol Borough, where you can peer out down the road and actually see the Delaware River.

It all really began back in August when The Midweek Wire ran a questionnaire from the candidates. Concerning climate change, Strouse wrote “I support natural gas drilling” at the end of his answer. Later, the campaign followed-up with a statement to clarify the candidate’s views:

We need improved oversight and greater transparency to ensure that any natural gas development is done safely. I welcome any opportunity to create good-paying local jobs so long as we do it the right way and doesn’t risk the safety of our community in the process.

The Naughton campaign has used Strouse’s statement of support as the basis for the Corbett claim in their ad and additionally to his detriment in direct mail pieces.

Within a month, Naughton signaled her desire to make this a key campaign issue by calling for a permanent ban on drilling in the Delaware River Basin, a position Strouse called “premature”.

They also pointed to Strouse’s 2009 masters thesis which concerned the influence Russia holds over Europe due to their natural gas exports to the continent (an issue that has come up recently during the annexation of Crimea). It should be noted that Strouse was a CIA Counter-terrorism analyst at this time so his focus on foreign policy rather than environmental impacts makes sense in context.

As his opponent continued to press the issue, Strouse repeatedly made clear he believes climate change exists and is a threat, including in a debate last month. His campaign sought to make his position clear by attacking Gov. Corbett while Naughton sent out direct mail pieces portraying Strouse and Corbett as “best fracking friends”. Strouse responded with his own mail piece stating he supports the moratorium.

All of which leads to our interview yesterday.

“It shows a clear distinction between Kevin and I.,” Naughton said of her ad. “I believe that this [Delaware River] is a resource that we have to make sure to protect and not be mealy-mouth about it. It’s why I’ve been very clear and consistent from the very beginning that we need a permanent federal ban on fracking in the Delaware River basin.”

When asked why she spent a significant portion of her finite campaign resources on this issue, she responded that this resonates with her potential constituents.

“It’s an important issue to people in the Eighth,” she said. “It’s one of the first questions I get when I’m at people’s doors, they want to know where I am on fracking. The Delaware River is part of who we are. If you read Kevin’s thesis, it sounds exactly like what Mike Fitzpatrick says.”

I inquired into her own position on natural gas drilling as a whole and cited a statement on her campaign website:

In Congress, I will introduce legislation mandating all fracking companies install facilities that allow for “clean gas” fracking.

When I asked for her view on drilling outside the Delaware River basin it seemed clear she saw the method as a short-term solution at best.

“I think we need to be pivoting away from the dirty fuels of the past and investing in clean technology so we that can be exporting technology rather than fossil fuels that are contributing to climate change. And we should be pursuing that from a federal level to make sure that we can grow and create the jobs and industries of the future.”

While attempting to explain her own definition of safe drilling, she touched on her concern and exhibited her deep knowledge (as a chemist) of what chemicals would be involved and their potential side-effects.

“At this point we do not need to be creating jobs by injecting toxic chemicals into the ground and we need to be pivoting away from that,” Naughton said. “Where it’s already going on it needs to be properly regulated. The chemicals that are being used are toxic. The idea of putting the drinking water of 15 million people at risk is unacceptable, which is why we need the federal ban.”

When I explicitly brought up her attempts to connect Strouse and Corbett together she didn’t back down from her campaigns claims.

“Does it [Strouse’s natural gas policy] look any different than Corbett’s? No, I mean, if you read his thesis it sounds the same as Corbett or Fitzpatrick on this issue.”

I brought up the fact that Strouse’s thesis was more of a foreign policy document and questioned whether the candidate felt her opponent’s actions represented an ideological difference or, as her ad insinuates, it is merely a product of the campaign cash he received.

“It does bring into question, why would you take $10,000 from fracking executives?” she asked back.

She made clear when pushed that she views natural gas drilling as a short-term solution yet was clear about the dangers.

“As long as we are putting carbon into the atmosphere, we are contributing to climate change,” she responded. “The methane that’s released in natural gas drilling is a very potent greenhouse gas, so as long as we’re doing that, we’re not doing anything about climate change. And that’s really we’re getting to the point where it’s very dangerous. So we need to be investing in new technology so that we can pivot away from these fuels of the past and that we create jobs and industries here so that we can export technology rather than fossil fuels.”

The question seemed to come down to her support of drilling as a short-term solution compared to her belief that Strouse sees drilling as a long-term fixture.

Today, the Strouse campaign released a lengthy statement responding to Naughton’s charges. They also stated that their candidate supports the moratorium, as well as closing the “Halliburton loophole”. Furthermore, Strouse’s campaign hit Naughton for taking money from oil company executives and asserted that her shares in a number of companies (such as Continental Resources, EOG Resources, Anterro Resources, and Chesapeake Energy), means she is personally profiting from fracking.

“Kevin has run a positive campaign focused on the issues that matter to middle-class families in Bucks and Montgomery counties like improving education to create opportunity and grow the middle-class,” his campaign stated. “It’s unfortunate that our opponent is so desperate that she needs to lie about Kevin’s record, and while doing so, expose herself as a hypocrite.”

“These latest distortions represent a clear trend of Ms. Naughton lying about, or exaggerating her own record,” they continued. “She claims to run a local business, when she actually exports the work to a company in Georgia that brags about using nonunion labor. She goes around telling people she is a scientist when she only worked in the field for three years, over a decade ago, and never earned a Ph.D. Voters don’t want another hypocrite in Congress, when they already have Congressman Fitzpatrick.”

Naughton and Strouse are battling to take on GOP incumbent Congressman Mike Fitzpatrick in the fall.

Update: The Naughton campaign responded to their opponent’s claims with the following statement: