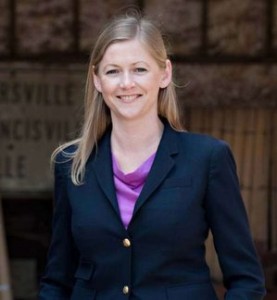 As we reported last week, Naughton announced this morning that she will run for the 2016 Democratic nomination in Pennsylvania’s 8th Congressional District.

“It’s nothing but a food fight in Washington and working families are the ones dealing with the mess,” Naughton said. “We need better job opportunities, better access to a quality education and better protections for Social Security and Medicare. I’m committed to cleaning up the mess and fighting for working families.”

“This district is my home and, for me, this race is personal,” she concluded. “I know these families and the challenges they face because they’re a lot like those my own family faced. My mom cleaned houses to support us and I’m grateful for her sacrifice because it gave us opportunities. I want to fight in Congress for those same opportunities for other families.”

The chemist and businesswoman also got a boost from perhaps the biggest Democrat in the commonwealth, former Governor Ed Rendell.

“Shaughnessy is a hard-working woman. She runs a business and she’s invested in her community.  I like her because she’s tough, she’s smart and she’s going to fight for regular people,” Rendell said.

The ex-Governor supported her in 2014 but only made the endorsement a few days before the election. Now, Rendell’s backing can be used to help fuel the all-important early fundraising efforts.

Naughton ran against Kevin Strouse in the 2014 primary. Despite Strouse having the backing of the DCCC, Naughton nearly pulled off the victory coming just 817 votes short.

Naughton will be running against State Representative Steve Santarsiero in the May 2016 primary.

We took a look at some possible paths to victory for each candidate and also ran down the list of other potential participants.

The Eighth Congressional District consists of Bucks County and parts of upper Montgomery County. It is currently represented by retiring Congressman Mike Fitzpatrick.

“It’s great to see that Shaughnessy Naughton is ready to engage in another divisive Democratic primary in Pennsylvania’s Eighth Congressional District.  It will be interesting to see who Democratic primary voters determine is liberal enough to defend the tax-and-spend agenda of Nancy Pelosi and Barack Obama in the general election.”