PA-8: Naughton Ready to Be A Do-Something Politician 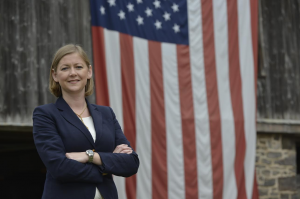 She is not an incumbent, nor a first-timer and also isn’t one of those people that is perpetually running for some office.

Instead she jumped into the political arena in 2014 and after coming up just short, feels 2016 might finally be her year.

On Friday afternoon, she carved out time to talk to me in the corner of a noisy Starbucks in Doylestown.

This was my first opportunity to interview a candidate for the second time. Since my first question for Congressional hopefuls is always “Why did you want to run for Congress?” I felt the only proper query was to ask why Naughton wanted to do this again.

“Nothing’s changed,” she put it bluntly.

“It is increasingly difficult, if not impossible, to break into the middle class and beyond. This campaign is about rebuilding that path to prosperity so that people can get ahead and build a good future for themselves and their kids.”

So what did she learn from her 2014 effort? Naughton mentioned that a voter recently asked her this and she responded that it’s like asking what do you not remember.

After being out-raised by her 2014 opponent Kevin Strouse, however, it’s clear that having the necessary resources is especially important to her now. Despite the fact that Naughton is running against a State Rep, she is leading the money race.

Speaking of that State Representative, Naughton and Santarsiero got into a bit of a Twitter tiff last week. It all began when Naughton noted that there was not currently “a realistic path” for the public option in an interview with the Bucks County Courier-Times. In a recent campaign email Santarsiero asserted that her comment could’ve “come straight out of the Tea Party Republican playbook”.

What was Naughton’s reaction to this back and forth?

“I think Steve’s taking a typical politician inroad and trying to obfuscate something that I said,” she responded. “I’ve been very clear that I support the public option. I’ve been on the record since the 2014 campaign and what he did was take something out of context.”

Since then, her campaign has attacked the State Rep. for not answering questions during a visit to an ELCON facility.

“This is not something that popped up overnight. I mean, we’ve been going to meetings about this for, I mean depending if you want to go back to Bristol or not, for a long time. It’s time to not run away from reporters but make your position known. I think the people have a right to know that.

The whole episode brought back memories of the contentious 2014 primary with Strouse, although Naughton disagreed.

“I think that we [Naughton and Strouse] both largely ran an issues based campaign.”

As I began to shift to Congressman Fitzpatrick and his brother, though, Naughton sought to make it clear that she took a big risk by jumping into the race three years ago and implicitly critiquing Santarsiero for staying on the sidelines.

“Somebody had the guts to step up in 2014 and run against Mike Fitzpatrick. Now, we weren’t successful in the primary obviously but it still shows that I was willing to take on that challenge because I believe this is important.”

The subject then turned to the 2016 GOP front-runner in PA-8, Brian Fitzpatrick, younger brother of the incumbent Congressman and political newcomer.

“We don’t know much about him, I know what I’ve read in the newspaper,” Naughton said. “That he wants to defund Planned Parenthood, that climate change he’s kind of had two very different statements on that. That he doesn’t have an opinion of Donald Trump! That’s kind of amazing, that might be the only person left in the world that doesn’t have an opinion of Donald Trump.”

I inquired into whether Naughton would make Fitzpatrick’s questionable entry into the race a topic.

“I’m not going to be putting up a silly website about it,” she stated, referring to a recent Santarsiero effort. “People have some honest questions that he has decided to not answer as to how that happened without making a phone call.”

Does Naughton have a favorite in the Presidential Democratic primary?

“I do. I’m supporting Hillary, I love Bernie. I kicked off the morning at the Progressive Summit a couple of years ago when he was the speaker. I think they are running a very respectful and issue-based campaign that it would nice if Republican presidential candidates took notice of.”

Each time I’ve gotten to talk to a Democratic candidate this cycle (Fetterman, Santarsiero, McGinty), I have asked them about trade, the issue that tears their party apart more than any other.

This can be seen in the combative debate over the Trans-Pacific Partnership.

“I do support trade but it needs to be fair trade. My concern with the TPP and why I don’t support is based on, is just look at how secret the negotiations were and continue to be. I mean Senators have to sign in and can’t bring their notes out with them just to review it.”

She also stated that she wanted stronger protections for environmental regulations and workers’ rights.

I still wanted to know how she squared this view with the fact that NAFTA was signed by Bill Clinton and TPP is being pushed by Barack Obama, the last two Democratic Presidents. Like every other Democratic candidate I’ve put this question to, Naughton side-stepped.

“We do benefit from global trade but again it goes back making sure that it’s fair.”

There is also the issue of how trade affects our relations with other nations and whether long-term security is worth the cost in short-term economic growth.

“That’s something that I actually I talk about a lot on the campaign trail is the importance of balancing short-term sacrifice and long-term gain and growth,” she answered. “I don’t take that lightly, but I do think for the long-term health of the 8th District, but also the United States, is we need to be creating jobs here and that means making sure we have a fair trade policy.”

Following that point we transitioned to foreign policy and how best the U.S. can combat terrorism abroad.

“Stability is the way we beat them,” Naughton stated.

She also contrasted her support for the nuclear deal with Iran to Santarsiero’s opposition.

“I think for long-term stability, and working towards peace, this deal puts us in a much better position.”

Unlike many others, Naughton was also passionate about Congress’ responsibility to vote for a new AUMF.

“I think it’s Congress’ job. It’s not going to be an easy vote for anybody, nor should it be, there’s no more important vote than authorizing Americans to go into a military zone. But the Constitution is clear, that is Congress’ job. They should be taking a vote on it.”

Another tradition has become finding out the candidate’s favorite current and past Supreme Court Justices. Naughton is a big fan of Ruth Bader Ginsburg and while she didn’t always agree with her, she respected the first female Justice Sandra Day O’Connor.

She also added her two cents about the current conflict over the court’s vacancy.

“I would like to see the Senate do it’s job and the fact that they aren’t holding hearings is shameful.”

As a scientist, Naughton is perhaps most passionate about the challenges and opportunities presented by global climate change.

“We need to be thinking beyond fossil fuels if we’re going to productively deal with climate change,” she asserted while calling for an Apollo-like program to invest in future clean energy jobs. investment, government needs to make investments for long-term benefits, she is optimistic that the opportunity for clean energy jobs will appeal to Republicans

I noted that cap and trade was a Republican proposal from the George H.W. Bush Administration that even Sarah Palin once supported. How can that change be reversed?

“It happened pretty quickly in one direction, so it can swing back,” she said.

Finally, I asked if she feels better about where this campaign stands compared to two years ago.

“It’s a different campaign, but yes we are feeling very good.”

I noted that the phrase “Harrisburg politician” was a lot more prevalent this time around, alluding to her State Rep. opponent.

“I think there is a real, palpable frustration with the do-nothing politicians. I’m not a politician, you know where I stand on issues, that’s something that resonates with folks.”

So how do you become a do-something politician?