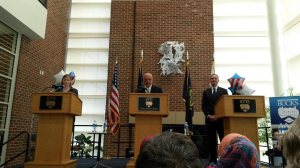 The room got dark.

Literally, between the Republican debate and the Democratic follow-up someone asked for the shades to be lowered on the lobby’s long windows.

It was a fitting omen.

Another early indicator came when just over a dozen Santarsiero supporters arrived early and filled in the first couple rows.

Finally, three hours before the debate started the Santarsiero campaign issued an email calling on Naughton and 314 PAC, her old organization and a major point of contention recently, to release forty-eight hour FEC reports.

Naughton should’ve seen the punch coming, but she didn’t.

After both candidates gave their familiar stump speech in their opening statements, Santarsiero brought up the pledge.

“I want to present a challenge to my opponent right now,” he stated before describing the pledge.

The subject actually dovetailed into Pezza’s first question about the negativity that has taken over the race.

“Is this really where you want your campaigns to be in these final days,” he asked the candidates.

“Well, we have been running a campaign based on the issues,” Naughton responded saying that voters were not concerned with these charges. “Now, my opponent has tried to make this an issue for quite some time now and he’s been caught lying about his position and his record multiple times by every newspaper that covers this race.”

It was around this time that murmurs in the front began (the press, including myself, were seated in front of, behind and next to these Santarsiero supporters).

“The accusation that there’s any coordination [with 314 PAC] is just false,” Naughton asserted. “I’m not going to allow you to lie about my record the way you lied about your own.”

That got even more of a reaction.

“No has accused me of lying about anything. If there’s been any lying it’s been by a Super PAC that you yourself created,” Santarsiero responded while again calling for Naughton to accept or decline his pledge.

Naughton refused to be drawn in.

“This is a grassroot funded campaign, the amount of time it would take to put together that report five days before an election is frankly a political stunt,” she asserted.

“We’re gonna do it, it doesn’t take that much time,” Santarsiero countered.

“Well I don’t have the big dollar contributors the way you do,” she shot back.

This prompted loud guffaws from the front row that Pezza had to step in and stop.

“Excuse me, this isn’t the Tonight Show.”

If it seems like I’ve spent a lot of time on the opening few minutes, it’s because they were essential to the rest of the debate.

The exchange and the front-loaded audience clearly threw Naughton off and made it seem like she was cornered. As a result, she struggled for quite a bit afterward although the event soon moved on to more substantive issues.

The candidates next clashed over the Iranian nuclear deal which Naughton supports and Santarsiero opposes. She noted that he holds the same position on the deal that Republicans do while he brought up the repression during the Green Revolution.

Towards the end, however, the conversation turned back to campaign finance and Santarsiero again pressed his pledge.

“I don’t think Steve has a problem with PAC money, he’s accepted hundreds of thousands of dollars of it,” Naughton said as she began to get her second wind. “He has a Super PAC right now running commercials for him.”

“Yes, I’ve taken a PAC check or two,” he responded. “From the United Auto Workers, the United Steelworkers, many of the Philadelphia trades. Because I stand with organized labor and they stand with me. I never take money from any organization that I don’t agree with.”

“I did found 314 PAC, but I stepped away from it before I launched my campaign for Congress,” Naughton stated. “So the fact that you’re trying to say I have anything to do with them is patently false. The newspapers have reported that nothing, there has been no violation. So you need to stop saying that and stop trying to mislead people. Frankly, the mailers that 314 PAC are sending out, I don’t appreciate. I’m been talking about the issues and your personal attacks on me, my family, my business over the last year have been horrible. I didn’t appreciate it but I don’t stand here and whine about it.”

These statements in particular were met with derision from the front rows.

“I’ve made no personal attacks on you or your family or anyone else in your campaign,” Santarsiero asserted. “The fact of the matter is one of your key campaign workers was paid both by the campaign and the Super PAC as recently as February. Now, I think people want to know where’s the money coming into that Super PAC now? Where’s it getting its money? And I think being transparent and providing that information now is a reasonable request and something we ought to be doing.”

He then went on to lament that his kids had seen the latest mailing that had some of his teeth blacked out (the idea was that his claims about his legislative record were “toothless”).

“You put out a statement calling me a tea-party Republican,” Naughton continued. “To me that sounds like a personal attack. You put out a statement saying that you passed 54 bills into law, when in fact you eventually had to admit the number was zero. So this is all just a distraction from your failed record in Harrisburg.”

Santarsiero defended himself by saying that 54 of the bills he has co-sponsored 54 bills have been passed.

“You’re running a campaign based on a lie,” Naughton concluded.

Pezza finally ended the debate with his traditional yes or no question to each participant: would the candidate return to BCCC in in the fall if they win the nomination?

“I plan on it,” Naughton answered.