PA-8: No Fireworks, Plenty of Policy at First Dem Debate 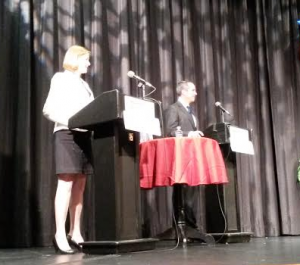 The two Democratic candidates in PA-8 gathered in Warminster for their first debate last night.

State Rep. Steve Santarsiero and Shaughnessy Naughton went at it for over an hour in the auditorium of a senior center.

Perhaps fittingly, the discussion was muted and without no real disagreements between the two. This did impress moderator Jack Nagel, though, who praised the candidates for setting “a high standard of civility and substance”.

If you were to grade them on style, Santarsiero would edge out Naughton if only because he has more experience speaking in such a setting. The difference was small enough, though, that most observers probably wouldn’t notice.

In their initial statements, each candidate described their own personal backgrounds in language similar to their interviews with me this past month.

Naughton found a way to stand out by jumping into a story about former Gov. Ed Rendell calling her after her narrow defeat in 2014.

Afterward, the two of them faced ten questions from Nagel.

The first question, appropriately enough, concerned Social Security. Santarsiero denounced efforts by George W. Bush and Paul Ryan to privatize it and called for increasing benefits to widows. Naughton advocated for raising the payroll tax cap, stating that millionaires like Donald Trump shouldn’t only have to pay the tax for the first $118,500 they make.

Naughton took a page from John Fetterman’s book, saying that one’s zip code should not determine their destiny. Santarsiero touched on his own experience as a teacher and mentioned his opposition to former Gov. Corbett’s education cuts.

Both candidates expressed support for the ACA while adding their own stipulations.

Santarsiero stated that he would’ve wanted to see a public option included and the elimination of the medical device tax. This was the moment it appeared the State Rep would go after his opponent as he’s criticized Naughton in the past for stating that the public option wasn’t “realistic” at this time. He didn’t throw that punch, however, and there was never really a threat of a disagreement breaking out after that.

Naughton meanwhile talked about her mother’s own difficulty getting health care before qualifying for Medicare.

Naughton called for a “revenue-neutral carbon tax” to help reduce emissions while Santarsiero emphasized the need to eliminate federal subsidies for dirty sources of fuel.

When asked the best way to reduce the income disparity in America, Santarsiero brought up the inequities in education and also proposed raising the minimum wage. His opponent identified the “carried-interest loophole” as an issue and talked about broader tax reform.

Each candidate promised to do more for the nation’s veterans and cited their own family history to show their connection to service members. For instance, Naughton had two grandfathers who fought in WWII and WWI as well as a sister and father in the service. Meanwhile Santarsiero’s grandfather fought in the Battle of the Bulge.

Santarsiero, the old history teacher, advocated for a 28th Amendment to the Constitution that would permanently overturn the Citizens United decision. Naughton stated that she wanted a “public amplifier” that would kick in for candidates at a certain point.

Nagel asked both candidates what areas of need existed in the 8th Congressional District and how they planned to address them. Naughton focused on her plan for clean energy jobs while Santarsiero pledged to create an “Office of Community Support” that would aid constituents in finding employment.

Why are Dems the minority Party?

The professor also questioned the Democratic hopefuls as to why their party can’t win a majority in the House of Representatives.

“Well in a word, it’s gerrymandering,” Santarsiero responded before mentioning he hopes for some meaningful reform.

Naughton also blamed gerrymandering but pointed to the new Democratic majority on the PA Supreme Court as a bulwark against a repeat of what happened after 2010.

Nagel next sought to find out how the candidates would appeal to anti-Trump Republicans.

“God help us” was Naughton’s reaction to a Trump nomination. She also cited the fact that she would PA’s only female Congresswoman if elected.

Her opponent also derided Trump as well as Ted Cruz. He pointed to his re-election in a Republican-leaning State House district as proof that he can win over those on the other side.

After a ten minute break, the debate resumed with written questions from the audience.

How will you be effective in Congress?

The first audience question was simple: If Congress is so bad, how can you expect to get anything good done?

Steve Santarsiero touched on his career in Harrisburg and moments when he’s reached across the aisle. “They’re not all crazy,” he said of Republicans.

Shaughnessy Naughton brought up her business experience. “I have gotten things done in the real world,” she stated.

Both candidates called America “a nation of immigrants” and rejected calls to demonize newcomers to the United States.

How can you bring jobs back?

This old chestnut, the one politicians are often asked but hardly ever know how to answer. Santarsiero discussed his opposition to trade deals while Naughton advocated investment in research development and infrastructure.

Naughton sought to dispel the feeling that scientific research needed to be cut to reduce the debt, recalling how many innovations emerged from government funding. Santarsiero brought up infrastructure and pointed out that Bill Clinton was running surpluses when he left office while George W. Bush left large deficits.

Would the candidates support safeguards on fracking? Turns out that the two Democrats, each passionate about climate change, indeed would.

What have you done for the community?

Perhaps the biggest curveball of the night, the candidates were asked to give three examples of times they served their community that weren’t connected to politics or elected office. Surprisingly, they both handled it well.

Naughton cited her support of Planned Parenthood, her tutorship of girls interested in STEM careers and donations to the Philadelphia Art Museum.

Santarsiero brought up his efforts before his political career to keep “big-box” stores out of Lower Makefield as well as helping a local restaurant rebuild after a fire and chairing the committee that chose his community’s Rabbi.

What Congressional Committee would you like to serve on?

If this questioner read PoliticsPA, they would’ve known the answer already as this is one of my favorites. A regular reader would’ve known that Naughton would say Science and Small Business while Santarsiero would decline to get ahead of himself.

Considering the setting, it shouldn’t be a shock that this issue came up. Naughton mentioned allowing Medicare to negotiate drug prices while Santarsiero noted that he is currently taking care of his father.

The candidates were asked if they supported term limits for Supreme Court Justices and members of Congress. Santarsiero was against the former but would support the latter if two-year House terms were extended to four years. Naughton opposed any form of judicial or legislative term limits. Both of them also used this opportunity to call for the Senate to act on President Obama’s nomination of Merrick Garland to the Supreme Court.

Each potential nominee took shaded shots at the other in their closings, with Naughton urging freshness and Santarsiero touting experience.

“We need a change in leadership,” she asserted.

“Experience does make a difference,” he countered.