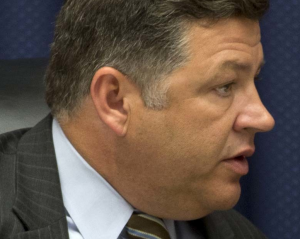 It would be a safe guess that Politico is not Congressman Bill Shuster’s favorite news outlet.

Congressman Shuster, his girlfriend/Airlines for America Vice President Shelley Rubino hung out with Rubino’s boss Nick Calio during a fundraising trip to Florida.

The issue? Shuster, Chair of the House Transportation Committee, is currently trying to change the way the nation’s air-traffic control industry is organized in a way that would benefit the clients of Airlines for America.

“Several lobbyists on the fundraising trip were taken aback by the closeness displayed by Shuster, Calio and Rubino as they mingled at the Shelbourne Wyndham Grand hotel on posh Collins Avenue in South Beach,” they write. “These sources requested anonymity, not wanting to antagonize a powerful committee chairman and the largest airline lobby.”

“Multiple attendees said the trio spent much of the trip together, hanging out poolside on deck chairs in front of a cabana that was rented for the weekend fundraiser. The three also took a private shuttle organized by Calio with others to a dinner Saturday night at Garcia’s Seafood Grille & Fish Market, a well-known Cuban restaurant in Miami, the sources said.”

In response to this latest revelation, primary challenger Art Halvorson is calling on the Congressman to resign.

“This is a sobering moment for the people of the 9th Congressional District, and the country, one that demands the resignation of House Transportation Committee Chairman Bill Shuster for unpardonable corruption, cronyism, and pay-to-play government,” Halvorson wrote.

“Washington is completely broken because congressmen like Bill Shuster have put government up for sale to those who fill their campaign coffers with ungodly sums of money, the safety and prosperity of their constituents be damned,” he continued. “Because he has continually and so flagrantly flouted good government and the norms of decency, he must submit his immediate resignation to the Speaker of the House. Much more than his resignation, however, is needed to restore honor to Congress and the Republican Party he and his colleagues have so besmirched.”

UPDATE: The Shuster campaign sent the following response to PoliticsPA:

“Art Halvorson has called on Congressman Shuster or other elected officials to resign over 15 times the last few years so this is nothing more than another political stunt from a candidate desperate to make news. Art Halvorson can’t talk about issues so he resorts to personal and disgusting attacks. It is absolutely ludicrous to even ask if Congressman Shuster would resign over a liberal tabloid-like story that is light on facts and heavy with misleading information. Instead Congressman Shuster is going to keep working on conservative solutions for the people of the 9th Congressional District.”