In the quest to retain his seat in Pennsylvania’s 9th District, Rep. Bill Shuster (R-Blair) has debuted his campaign’s first television ad that’s set to hit the airwaves today.

“Too many politicians in Washington love to talk,” a deep voice says over slightly ominous music, “but Bill Shuster…,” the voice continues, as the music suddenly brightens.

With that, it becomes clear that the overall theme of the ad is that Shuster is a Congressman who listens to his constituents.

“He heard his neighbors were losing their healthcare,” the voice continues. “That’s why he voted against Obamacare 42 times. He heard from parents, worried about their children’s future. So he fought to cut $10 trillion in wasteful spending.” 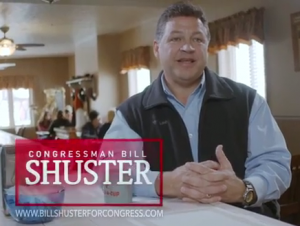 In the ad, Shuster’s campaign maintains that he’s a proven conservative, something opponent and former Coast Guard Captain Art Halvorson has called him out on repeatedly.

The spot will go up on broadcast in the Altoona and Johnstown market along with a considerable cable buy throughout the 9th District. The combined buy for broadcast and cable will cost his campaign $400,000 for the month.

Going hand-in-hand with the broadcast and cable buy, Shuster’s campaign has also put the ad up online on pre-roll. This means the ad will appear at the beginning of online videos. Shuster’s campaign manager Sean Joyce calls this, “arguably one of the most effective forms of online advertising.”

The ad will air on several national-level sites that target primary voters registered as Republicans.

“This is just another way our campaign is looking to saturate the market to ensure younger Republican voters who may not be as tuned into cable are still able to view the content and see Congressman Shuster’s message of proven conservative leadership,” Joyce told PoliticsPA.

So far, Shuster has only posted video ads on the web. The most recent was posted at the end of February, following Shuster around on his bus tour of the 9th District. Earlier this year, he released an ad blaming Obama for the shutdown of a power plant in Greene County.

Shuster also recently engaged in a radio ad war with Halvorson, who’s running for the 9th District seat under the Tea Party. Republican Travis Schooley is also a potential candidate, though when he conducted his own amateur poll in the district, Shuster had him beat and he hadn’t named Halvorson in the polling.