Harrisburg — It took Kathleen Kane about 5 minutes as Pennsylvania’s new Attorney General to demonstrate that she’s not like the other people who have won that office. She’s a mother, too. 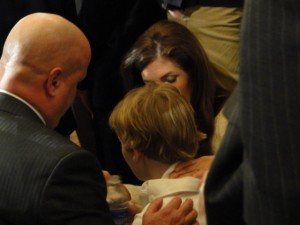 Her younger son, Zach, fainted during her inauguration speech on the steps of the Capitol rotunda. Kane concluded her remarks and tended to her son (who was overheated and recovered quickly – he’s fine now, she said later).

But in a matter of minutes, the first woman ever elected to the AG’s office went from triumphant political leader to concerned mom.

Kane and her family celebrated her decisive November win among dozens of friends, family, and luminaries from all corners of Pa. politics.

She reiterated her campaign theme of protecting the defenseless; children, the elderly, and victims of crime. She also addressed the topic of gun violence.

Tomorrow, Kane will address one of the big questions of her tenure: how aggressively will she confront Corbett and other Harrisburg Republicans.

By far the most watched of issue of all is in what manner will she investigate the way that the AG’s office under Corbett dealt with the Jerry Sandusky child sex abuse scandal at Penn State.

But those questions will wait for Wednesday. 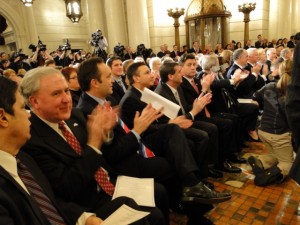 “Today, mothers across this Commonwealth can rightly promise their daughters: anything is possible. Go and follow your dream,” Kane said.

The historic nature of the occasion was emphasized even more by the front row of Pa. officials at the event. With the exception of Mrs. Terese Casey, all of them were men.

Some political scientists believe that the election of more women to office will yield a political process that is more civil and productive. In that human moment when Kane’s son fell down, they were proved right.

Campaign trail barbs forgotten, Gov. Tom Corbett was among the first to respond. He jumped from his front row seat to hand Kane a bottle of water and some tissues for her son.

“She’ll be Attorney General for at least the next four years, but it’s clear she’ll be a mother for life,” remarked Dan McCaffery, the event’s emcee and Kane’s one-time Democratic primary rival.