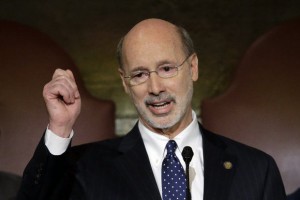 In a move that could chew up several weeks, GOP State Representatives are working on sending a municipal pension reform bill to Gov. Tom Wolf’s desk, where it will presumably be sent back with a veto.

The bill would make municipalities’ pension contributions more predictable, while capping employee overtime at 10% of salary and changing the accounting practices used to determine a plan’s fiscal health.

The bill was approved on a party-line vote with committee Democrats saying it doesn’t ensure retirement security. Sen. John Blake, committee minority chairman, said Democrats are “80% on board” with the bill, but “it is very difficult for us to agree” without certain recommendations from Auditor General Eugene DePasquale being included.

DePasquale’s recommendation that the state should create a new benefit structure has created the chasm, according to a letter sent to Wolf from several PA mayors.

“There’s some willingness on the municipalities’ parts to work on this – there are contribution issues and things like that – but the bottom line has been the police and firefighters have not been willing to sit down at the table,” Eichelberger told Capitolwire. “Their answer is ‘we don’t want any changes to the municipal pension program,’ and that’s unacceptable.”

Sen. Art Haywood backs the labor unions, questioning whether uniformed professionals can survive on the pensions they would receive under the bill.