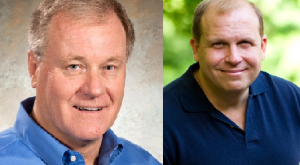 Well, at least we have a good debate going.

For months now, we’ve been locked in a stalemate over the budget. This impasse has not only been rather interminable but also seemingly silent. There have been very little theatrics given the important subject matter.

Today, however, State Sen. Scott Wagner sought to change the narrative by issuing an open letter to editorial writers throughout the commonwealth to stop blaming the legislature.

“It appears that newspaper editorial departments across the state are offering their opinion on the state budget,” Wagner wrote. “Let me set the record straight — the legislature met its obligation to pass a balanced budget by the constitutionally required deadline.”

“Gov. Wolf chose to veto a budget that was balanced, did not raise taxes, and provided increased education funding.”

State Sen. Daylin Leach responded with a letter of his own.

“As we in government struggle to enact a budget, people are weighing in with their opinion,” Leach began. “Recently, my colleague Senator Scott Wagner sent a letter to media outlets across the state offering the Republican Party line. In the interests of balance, I offer this competing view.”

When viewed together, Wagner’s and Leach’s comments form an intriguing debate between two State Senators over the budget. A debate that is helped by the fact that they are arguably the most conservative and progressive Senators in the chamber and clearly the most entertaining.

“Gov. Wolf had the power to use what is called a line-item veto — he could have approved approximately 270 items, and he could have vetoed the rest,” Sen. Wagner argued.

“Instead he has left organizations in our communities scrambling to stay afloat because he insists on a tax-and-spend budget that exacerbates the problem that I continue to call attention to — Harrisburg does not have a revenue problem, it has a spending problem.”

“The Constitution requires the Governor’s signature for a reason,” Sen. Leach retorts. “He is the head of a co-equal branch of government. The legislature knew that the budget they were passing was not viable and that it would never become law. Thus, it was nothing more than a political stunt.”

Leach asserts that the GOP merely passed another of Gov. Corbett’s budgets and are acting surprised that Gov. Wolf hasn’t signed it.

“Senator Wagner correctly points out that Governor Wolf could have signed parts of the budget while vetoing the rest,” Leach states. “However, that would have been highly irresponsible. Spending money on some things without having any idea how much we will ultimately spend on other things, and without knowing what our tax structure will be, is a recipe for fiscal catastrophe.”

“Our state is financially distressed and needs a turnaround governor, not a tax-and-spend governor,” Wagner continues. “Let me be crystal clear: I will not be voting for any additional tax increases. I will continue to beat on the table demanding accountability for the taxes everyone already pays.”

“Senator Wagner finishes his editorial with a stock attack on “taxing and spending” and a promise not to vote for additional taxes. Fair enough,” Leach responds. “I could certainly talk about all the investments in Pennsylvania we have failed to make recently, and how we desperately need the revenue that a shale tax would provide.”

“I would ask editorial writers to do everyone a favor and stop blaming the legislature and point the blame to Gov. Wolf,” Wagner concludes.

Meanwhile, Leach finishes by stating that “the more pressing point is that there won’t be any budget until the Republican legislators acknowledge that there is a Governor, and that he has concerns and priorities that must be addressed.”

We might not be any closer to a budget agreement, but maybe you are closer to understanding why we don’t have one right now.