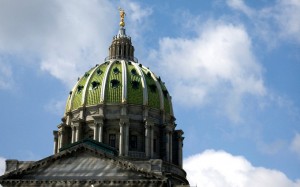 Still at square one.

All 19 Democrats in the PA Senate stood with Gov. Tom Wolf on Wednesday to defeat Senate Republicans’ push to override Wolf’s latest veto.

One month ago, Wolf rejected a GOP-backed short-term budget solution, calling it an “avoidance maneuver” that had the same problems as House Bill 1192, which Wolf vetoed on June 30 to kick off four months of fruitless negotiations.

Several school superintendents were in the Senate chambers on Wednesday to see the override measure fail, according to Marc Levy and Peter Jackson of the Associated Press, leaving many districts and social service providers on the financial brink.

“You think they care whether this is temporary money? It’s one-third? I don’t think they care,” Sen. Majority Leader Jake Corman said of the superintendents. “I think they care that their doors are going to stay open, that they can pay their employees, that parents in their districts won’t have to face the decision, ‘What am I going to do with my kids while I’m working a full day because their school is closed?’”

At a press conference after the vote, Wolf insisted on a comprehensive budget agreement, again warning of the state’s structural deficits, which have led to five credit downgrades in three years.

“If we don’t work now for a budget that works, we’re going to be in really bigger problems in a very short time,” Wolf said.

For Wolf to put his signature on a budget, GOP legislative leaders will have to find middle ground with the Governor on education funding, taxes, pension reform, liquor privatization and a natural gas severance tax.

Auditor General Eugene DePasquale reported that PA school districts have taken out $431 million in loans since the budget impasse began 121 days ago, while predicting total borrowing by schools in the state could break $1 billion by December.