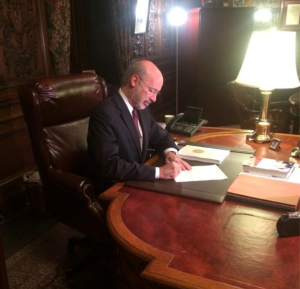 Governor Wolf revealed this morning that he intends to veto the pension reform bill crafted and passed by Republicans in the legislature.

Since then, Wolf released his veto message to explain why he is rejecting the bill and sending it back to the legislature.

The full message is included below:

“I understand the need for pension reform, but this legislation provides no immediate cost savings to taxpayers and does not maximize long-term savings for taxpayers. We need pension reform that works. There are provisions within this legislation, which as part of a comprehensive pension proposal I could support; however, Senate Bill 1 does not address the problems facing our pension system comprehensively and fairly.

“The plan I delivered to the General Assembly would save at least $10 billion, while at the same time ensuring that the commonwealth will make all actuarially required contributions to fund our future pension obligations and reducing the burden placed on the commonwealth and school districts in the short term. Since my budget proposal I have found and shared an added $7 billion in savings, a total of $17 billion in savings to our retirement systems, which I have communicated to the General Assembly. Furthermore, the plan I proposed would reduce the over $700 million in fees paid annually to Wall Street firms to manage our investments, Senate Bill 1 does not address these excessive fees.

“This legislation was pushed through without negotiation by Republicans along with an unbalanced budget, and this legislation produces no savings to our deficit in the next fiscal year. We need a comprehensive agreement on the issues facing Pennsylvania including education funding, the need for a commonsense severance tax on natural gas, balancing our budget for the long term, and pension reform.

“Furthermore, during my consideration of this legislation, it became clear that this legislation violates federal tax law as it would be considered an impermissible cash or deferred arrangement (CODA). In addition, the bill forces newly-hired employees to pay down the unfunded liability of existing pension plans, caused by years of government failure to make necessary payments, while denying those new employees the full benefit of their contributions.

“I urge the General Assembly to resume negotiations and work to enact a comprehensive plan that will balance our budget, invest in our schools, make oil and gas companies pay their fair share, and solve Pennsylvania’s pension problem.”

PA Republican Party Chairman Rob Gleason released his own statement after Gov. Wolf’s veto. It is presented below:

“For the third time since taking office, Governor Tom Wolf has chosen to say no to efforts to make our government work better. At a time when an astounding sixty cents of every new taxpayer dollar is earmarked for rising pension costs, Governor Wolf refuses to even acknowledge the existence of Pennsylvania’s public pension crisis. Our pension crisis is ruining the budgets of school districts across Pennsylvania, but Tom Wolf would rather keep his head in the sand than join with Republicans in enacting meaningful reform.

“I commend Senate President Pro Tempore Joe Scarnati, Speaker Mike Turzai, Senate Majority Leader Jake Corman, House Majority Leader Dave Reed and Senate and House Republicans for their tireless efforts to bring much-needed public pension reform to our Commonwealth. While Governor Wolf may stand on the side of his liberal special interest benefactors, our Republicans leaders in the General Assembly will continue to fight for Pennsylvania families.”