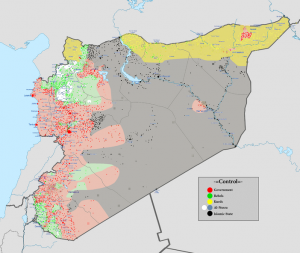 The issue doesn’t seem to be going away.

The growing refugee crisis in Syria attracted more attention after the terrorist attacks in Paris.

We’ve gathered the reactions of a number of PA officials but ten congressional Republicans from the Keystone State are doubling down on their belief that the U.S. should not bring in any additional refugees at this time.

The ten men wrote a letter to Governor Wolf, who has no power over the issue but is one of the relatively few state executives to say he would welcome Syrians fleeing the turbulence.

The full text of the letter is presented below:

The United States has a proud history, as does the Commonwealth of Pennsylvania, in offering refuge to peoples persecuted and displaced across the globe. But in the midst of a highly volatile and potential threat against the homeland, our nation has an obligation to protect American citizens from those who seek to take advantage of our generosity at the expense of innocent lives.

The recent terrorist attacks in Paris, France are a stark reminder that we cannot risk the safety of our homeland and our Commonwealth; therefore, we write to ask you to suspend Pennsylvania’s participation in President Obama’s Syrian refugee resettlement initiative.

Despite concerns expressed by his own national security team on the lack of screenings and background checks, President Obama has directed his Administration to scale up the number of Syrian refugees coming to the United States next year. The United States expects to admit 70,000 refugees from all over the world next fiscal year, including 10,000 Syrian refugees. Though promised to Congress, the Administration has not provided details of a rigorous and thorough screening plan  one that will thwart ISIS infiltration  for this refugee initiative. Meanwhile, the Director of National Intelligence, the Director of Federal Bureau of Investigations, and the Secretary of Homeland Security have all provided testimony to Congress in recent weeks stating that they cannot properly screen refugees coming from Syria and the surrounding regions for national security threats.

Mayors from larger metropolitan areas in Pennsylvania, including Pittsburgh and Allentown, have agreed to accept Syrian refugees for resettlement. Given the shocking and depraved nature of the terrorist attacks in Paris, we request that you join the leadership of Governors from 27 states and indefinitely suspend efforts to bring Syrian refugees to Pennsylvania until there are verifiable and robust mechanisms in place to properly screen all participants for potential security risks.