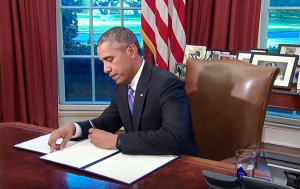 Yesterday, President Obama did something he has rarely done.

Pres. Obama told reporters that he was sending the bill back for three reasons: 1. it kept across-the-board budget cuts in place 2. it blocked needed reforms 3. it prohibits him from closing the prison at Guantanamo Bay, Cuba.

This is just the fifth veto of President Obama’s tenure, which is extraordinary considering he is in his seventh year (as well as the fact that Republicans have held the House since 2011 and took the Senate this year).

Barack Obama has used his veto pen the fewest times since President James A. Garfield. Of course, in 1881 Garfield was shot 120 days into his term and died 80 days later so he didn’t have much of a chance to veto anything.

Republican members of Congress from Pennsylvania (and presumably other states as well) are furious over the President’s action.

Their responses are included below:

“I am very disappointed by President Obama’s veto of this essential and bipartisan legislation. The National Defense Authorization Act (NDAA) is an important bill that bolsters our national security, protects the American people, and supports our brave men and women serving in the military. Among other things, this measure ensures that our troops receive their annual cost of living pay increase and prevents dangerous terrorist detainees from being transferred from Guantanamo Bay to the homeland.

“It’s also outrageous that President Obama is vetoing this bipartisan measure for reasons that really have nothing to do with our national security – namely, he is holding the NDAA bill hostage until Congress breaks the budget caps, gives him more money for non-defense programs, and increases the deficit. At a time when our nation’s military is facing so many challenges across the globe, the President should not be withholding support for our troops as part of a partisan effort to spend even more money we do not have and burden our children and grandchildren with more debt.

“In light of the bipartisan support the NDAA received in both the House and Senate, I hope that Congress is able to rise to the occasion, override this dangerous veto, and make sure that our national security and troops get the support they need.”

“As the world descends into chaos and requires American leadership more than ever, it is unconscionable for the president to block the funding of our military over unrelated budgetary disagreements. For him to place a higher priority on his domestic political agenda than the defense of this nation and the well-being of our military families is an abdication of his duties as Commander-in-Chief. I am hopeful that both the House and the Senate will be able to successfully override this errant veto.”

“At a time when threats facing our nation are high, international situations complex and the world is looking for American leadership, there is no place for this administration to play politics with our military and national defense. By vetoing the NDAA, the president has put his own goals ahead of a robust foreign policy vision that protects our nation and our allies, and a stronger commitment to those serving in our armed forces.

This bipartisan legislation contains important pieces of U.S. policy, including:

The protection of our nation and people is the highest duty of all lawmakers. It is my hope that President Obama works with the overwhelming majority of Congress on adopting this vital legislation, rather than the irresponsible use our troops and defense as bargaining chips.”

After several months of negotiations between House and Senate leaders, which included Congressman Bill Shuster (R-Hollidaysburg), the House passed the Conference Report to H.R.1735, National Defense Authorization Act (NDAA) for Fiscal Year 2016 on Thursday. Conferees were selected in June to work out the differences between the House and Senate versions of the legislation.

The annual legislation authorizes $515 billion for national defense and $89.2 billion for Overseas Contingency Operations (OCO). In total, the NDAA includes $604.2 billion in funding for our nation’s defense and our armed forces.

“It is tough to watch the news these days as we are seeing the Islamic State of Iraq and Syria (ISIS) grow, the Taliban retake ground in Afghanistan, and Syria in shambles,” said Congressman Shuster. “The president’s failure to lead on the world stage has allowed much of this to happen, and it won’t get better unless our military is taking an active role in not only slowing our enemies – but in destroying them.”

This legislation is crucial in the ongoing fight against ISIS. NDAA authorizes $715 million in security assistance for Iraqi forces combatting ISIS. It also authorizes funds to Jordan for border security and military capabilities, and allows the Secretary of Defense to establish a pilot program to counter ISIS’ propaganda efforts, helping America win the narrative in the online battle against terror.

Congressman Shuster, the only Pennsylvania member on the House Armed Services Committee, successfully worked to prevent any language from being included in the bill to authorize a Base Realignment and Closure (BRAC), a process that could force Letterkenny Army Depot in Franklin County to face significant cuts. During consideration of the legislation in committee, Ranking Member Adam Smith offered an amendment to authorize BRAC. While the amendment was withdrawn there continues to be support from Armed Service Committee members in both the House and Senate for a potential BRAC. Congressman Shuster remains a fierce opponent to any policies that could harm Letterkenny and the work they do for our men and women serving across the world.

“Letterkenny Army Depot helps equip our military in what have become extremely dangerous times,” continued Shuster. “Our community is proud of the quality work they are doing, and I am continuing to work in my role on the House Armed Services Committee to assure they do not face any future cuts to their workload.”

“I’m extremely disappointed by President Obama’s decision to veto the National Defense Authorization bill. Using our servicemembers as ammunition in a political fight is wrong.

Our men and women in uniform should not have to pay the penalty for the President’s political brinksmanship. The NDAA is an important bill that has long enjoyed bipartisan support – something that unfortunately is becoming too rare in Washington.

This bill provided the President with the full amount of his requested funding for the military. It met the needs of our service branches to maintain a robust defense posture and confront the ever-increasing threats we face around the world.

Instead of granting our men and women in uniform a 1.3% pay raise and providing them with financial security by establishing a new 401(k)-style retirement system for the 83% of service members with less than 20 years to build up a nest egg, the President’s veto will embolden our enemies and send a morale-deflating message to our troops actively engaged in war that their welfare and safety are less important than further expanding domestic spending and federal bureaucracies.

President Obama has made a regrettable decision with this veto. It is my hope that both the House and Senate will vote to overturn his veto and salvage this well-constructed bill.”