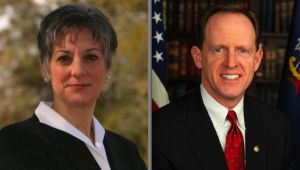 This week has been tough — yesterday the the DOW dropped 634 points in response to S&P downgrading America’s credit rating from AAA to AA+. S&P said their decision was partially due to political gridlock and called for reforms to the tax code and entitlement programs.

This sets the stage for the “super committee,” comprised of 12 members evenly divided between Democrats and Republicans from the Senate and the House, which is tasked with devising a comprehensive $1.5 trillion deficit reduction plan.

Although the members of the “super committee” have not been named it looks like Pennsylvania might play a critical role. Representative Allyson Schwartz (D-13) seems to be a top contender for one of the three Democratic House member positions.

The speculation around Representative Schwartz is justified. She is the second ranking Democrat on the Budget Committee, has a good relationship with House Minority Leader Nancy Pelosi and is well respected in the moderate circles of the Democratic Party.

The other Pennsylvanian who might get tapped for a spot on the “super committee” is Senator Pat Toomey. During the debt ceiling negotiations Toomey raised his profile by fiercely advocating for serious austerity measures. When the deal was finally reached Toomey was one of the 26 Senators to vote against it; citing that it did not deal with long term spending problems. He was also named by the Washington Post as a possible pick.

Last week during a segment of Greta Van Susteren’s television show Toomey said he, “would be delighted to serve on the committee…and intends to ask to be considered.”

Toomey has reasons to be hopeful – his experience in the private sector is a plus for the GOP. On top of that, if Senate Minority Leader Mitch McConnell chooses Toomey it will appeal to tea party activists and could help leadership seem more inclusive of the large GOP freshman class.

One GOP insider close to Toomey thinks it’s in the realm of possibility.

“He’s smart on the issues and he’s not up for election for 5 years. [Committee members are] supposed to be Senior Committee Chairs, etc. But you have guys like [Sen. Orrin] Hatch who I’m sure doesn’t want to be on, as there will be lots of controversial calls and his potential primary opponent will throw stones no matter what.”

Neither Schwartz nor Toomey’s office responded to requests for comment, which comes as little surprise as everyone in Washington is keeping their strategy close to the vest on this one.