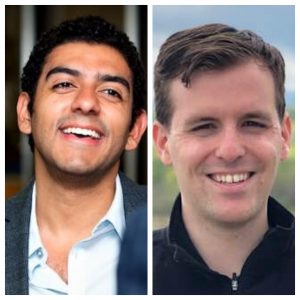 The Pennsylvania Democratic Party has a new communications team.

“We are excited to announce the hires of Brendan Welch and Andres Anzola as our new Communications Director and Deputy Communications Director,” said Sinceré Harris, Executive Director of the Pennsylvania Democratic Party. “Our party is building the strongest possible team to ensure we elect outstanding Democratic candidates up and down the ballot. Brendan and Andres bring strong expertise in messaging and political strategy to the table that will help us continue the progress we’ve made for Pennsylvania families.”

Brandon Cwalina, who was previously the spokesperson for the PA Democratic Party, now works for the state.

Welch’s most recent position was working for Rep. Dean Phillips (D-MN). He worked as a Communications Advisor for the PA Democratic Party during the 2018 election cycle. Other communications roles he’s held include working for Reps. Cheri Bustos (D-IL) and Joe Courtney (D-CT) and for the campaign of Rep. Antonio Delgado (D-NY).

“I’m grateful for the opportunity to return to the commonwealth at such a pivotal time,” Welch said in a release. “With a strong record of fighting for hardworking families, working to lower health care costs and cleaning up corruption, Pennsylvania Democrats have the wind at our backs. I look forward to working with Chairwoman Mills, Sinceré and the rest of the team to build on our success and help elect candidates who will put Pennsylvanians first.”

Anzola, a Pittsburgh native, most recently served as Sen. Bob Casey’s press secretary, although he held various positions within the office during his tenure there.

“Pennsylvania is the key for Democrats to take back the White House in 2020,” Anzola said in a release. “I’m thankful for the opportunity to work with the PA Dems to make sure the GOP and the Trump Administration are held accountable for their record of broken promises and their anti-worker agenda.”