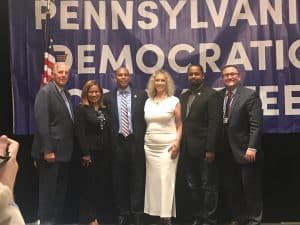 The road starts in Pennsylvania. What path will the party take though?

The Pennsylvania Democratic Party Fall meeting taking place this past weekend, just 60 days before the election, stressed the significance of electing Democrats up and down the ballot and discussed what they believe voters want to see.

“What they don’t want to hear is what we’re against. They want us to say, tell us what you’re about,” Gov. Tom Wolf said. “We are exactly what people want.”

On the other hand, the keynote speaker for the Keystone Dinner, Rep. Hakeem Jeffries (D-NY), didn’t shy away from sharing what he thinks the masses see in their President.

“We have a hater in the White House,” Jeffries said. “The grand wizard of 1600 Pennsylvania Avenue.” He also described Trump as a “Richard Nixon type crook.”

Wolf boasted about his record in office thus far and believes that Democrats need to tell voters that they are for three things: helping people, doing the right thing, and showing integrity.

A major theme of the evening was boasting about the special election victory of Rep. Conor Lamb in March, while promoting progressive talking points in the party.

Democrats in the state believe that Pennsylvania can play a unique role in the party’s effort to take back the house. During her first state committee meeting as party chair, Nancy Patton Mills, recalled a conversation she held with DNC Chair, Tom Perez stressing the role of her commonwealth.

“He said ‘Nancy, you are ground zero in Pennsylvania,” Mills said. “I said we are ready for it.”

The new Congressional map ordered by the State Supreme Court in Pennsylvania has helped change the expectations of the Democrats in the fall, but wanted to reiterate the special election victory of Rep. Conor Lamb as proof the wave is coming regardless.

“We also won a seat before that redistricting in Conor Lamb and he showed us the blueprint for how it can be done in Pennsylvania,” Mills said.

The Democrats currently have 6 of the 18 Congressional seats in the state, but the most recent FiveThirtyEight polling shows a 9-9 split delegation after November’s election.

Since the divisive 2016 election, the one giant uniter for the Democratic Party has been President Donald Trump. No one at the dinner Friday night channel that energy better than the New York congressman, who the Washington Post dubbed “Brooklyn’s Barack Obama.” Jeffries deemed the current President as an “existential threat.”

“Our diversity is a strength, not a weakness,” he said. “Out of many we are one, that’s what makes America great.”

Channeling the message of diversity before Jeffries’s address, Bullock discussed the need to encourage more diverse individuals to run for public office.

“I often joke about the fact that, and no offense to you if your name is Mike, but there are more men, white men named Mike in the general assembly than there are women of color, 13 Mikes, 10 women of color,” Bullock said.

“I’m not here asking, I’m here to dare you to get out to vote,” she said. “I dare you to embrace all of our Democrats, whether they identify as a socialist, a progressive, a liberal, a Berniecrat, it does not matter. We’re knocking on your door.”

“There’s something about that dare,” Bullock said. “Because I’ll tell you, If you dare me, I’m going to get it done.”

In their plea to voters for the 2018 election, several speakers recognized the errors the Democratic party has made in recent elections.

“We haven’t done well the past 2 cycles,” Blake said. “The other side is better at dividing us.”

The Democrats have seen a gradual decrease in representation outside of the metropolitan areas of the state, and the party is hoping to change that starting in November.

“To my friends and colleagues in rural Pennsylvania, we didn’t show up,” Street said. “Republicans had a terrible message for you in ‘16, we had no message at all.”

Street also believes the party didn’t do an adequate job reaching out to black and latino communities in 2016.

“We also didn’t go into the inner city,” he said. “We took votes for granted.”

Looking forward to the upcoming election, multiple speakers touted specific policy issues that they believe will bring the Democrats back into power.

“This man (Wolf) is the firewall that protects that and safeguards that in Pennsylvania,” Fetterman said, referring to union rights, a women’s right to choose, and other Democratic policies.

“Are you ready to take our country back from the millionaires and billionaires who are robbing taxpayer dollars to subsidize the lifestyles of the rich and famous,” Jeffries asked the crowd. “We’re going to fight for a real infrastructure plan that invests $1 trillion and creates 16 million good-paying jobs.”

The multiple references of defending unions resulted in some of the loudest responses in the evening and was particularly emphasized from the lone labor leader speaker.

“Working families will no longer tolerate continued disrespect and inaction by elected officials,” Amoros said. “Because for too long, organized labor has been the punching bag for right-wing extremists, who chose to side with greedy corporate interests, while forgetting about the little guy and gal.”

Jeffries likened the current state of the nation as a plane going through turbulence, but believes the country, led by Democrats will provide better days.

Casey was not present at the dinner or meeting, but relayed a message via recorded video at the Saturday meeting discussing the important work of Democrats and his campaign.