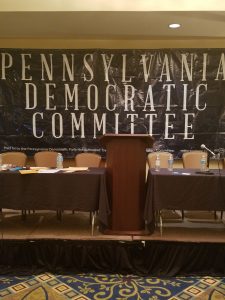 Harrisburg — The Pennsylvania Democratic Party gathered in Harrisburg to kick-off its Winter Meeting. The theme of the Friday dinner was turning Pennsylvania blue again.

“This year is a test case for next year, because when our Governor Wolf and Senator Casey are on the ballot, we need to win, and win big,” Allegheny County Executive Rich Fitzgerald said.

“We for too long have ignored portions of the state and taken them for granted,” Pa. Democratic Chairman Marcel Groen acknowledged. “We have to go everywhere, our mantra for this year is to get every single committee slot filled.”

“We need people to run for every single office,” Groen said.

Wolf took the chance to practice what will probably become part of his 2018 stump speech.

“We need to convince our fellow citizens that we hold dear are the values that made America great,” Governor Tom Wolf said.

Wolf took the opportunity to hit the Trump administration, referencing his trips to Philadelphia and Allentown to meet with the family of Syrian refugees who had been turned away by Trump’s controversial Executive Order on immigration.

“We will make sure we never repeat the mistakes of November 8th ever again,” Wolf said. “We need to make sure in 2018 that Bob Casey and I get elected.”

UPDATE: The Republican Party of Pennsylvania responded by pushing back against Wolf’s previous budget proposals.

“Pennsylvania voters have consistently rejected Governor Wolf’s high tax and anti-growth record. Even Governor Wolf, after attempting to impose draconian tax increases in Pennsylvania on families and businesses, is finally talking about restraining the size of government — we welcome him to that conversation,” PA GOP Chairman Val DiGiorgio said.

Scranton attorney Todd Eagen won the biggest battle of all Saturday. Dems had 7 candidates for two Commonwealth Court vacancies, and there was a concerted push by most hopefuls to prevent a party endorsement altogether.

The party changed the rules to create a 50 vote threshold that candidates had to cross to be carried forward onto the second ballot.

Eagen was endorsed on the first ballot, and Ceisler and Cosgrove were the only two to surpass the 50 vote threshold.

On the second ballot neither candidate reached the two-thirds majority needed, so the Party did not endorse for the second open seat.

“We feel very good that the Party has endorsed me because they see me as the strongest candidate, not only for the election in May, but also in November, and right on the issues that are important to us as Democrats,” Eagen said after the endorsement.

The endorsement should be taken with a grain of salt; despite having the party’s endorsement in 2015, Eagen lost the primary to Michael Wojcik

The vote was a defeat for Cosgrove, who currently sits on the Commonwealth Court after a July appointment by Gov. Wolf and is running for a full term.

Judge Dwayne Woodruff is the only Democrat running for Supreme Court and was affirmed by unanimous voice vote by the members.

The Superior Court field was narrowed down by the time of the endorsement meeting, which led to Judge Carolyn Nichols, Judge Deborah A. Kunselman, Judge Maria McLaughlin and Judge H. Geoffrey Moulton Jr. being endorsed by the members in a voice vote.  Pittsburgh attorney Bill Caye withdrew from consideration from the endorsement.

The main rumors coming out of the night were about the endorsement votes.  The main rumor was that there will be a push not to endorse for at least one, if not both seats on the Commonwealth Court.

During the Receptions, Senate Democratic Leader Jay Costa made stops at all of the receptions in the hotel, including a long stint in Representative Bryan Barbin’s reception.

Minnesota Congressman Keith Ellison, a candidate for chairman of the Democratic National Committee, made the rounds Friday afternoon – speaking with committee members and seeking support.

Disclosure: Judge Ellen Ceisler was formerly married to Larry Ceisler, one of the owners of PoliticsPA.