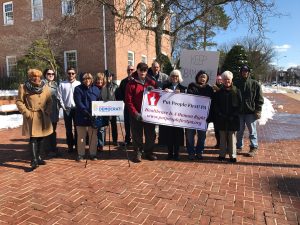 The Pennsylvania Democratic Party wants to talk about the GOP plan to repeal and replace Obamacare. State Senator and gubernatorial hopeful Scott Wagner does not.

“If Scott Wagner thinks he can run Pennsylvania, he needs to come out from behind the covers and tell voters he supports the GOP health care plan that would hurt seniors and working families,” Pa. Dems Communications Director Beth Melena said in a release.

Wagner, who is seldom quiet about any topic, has been quiet on the AHCA. His campaign reiterated his longstanding opposition to the Affordable Care Act.

“Senator Wagner supports the full repeal of Obamacare. As a business owner, he has seen the dramatic increase in costs in the years since Obamacare was passed,” Wagner’s campaign said in response to the attacks.

Asked to comment specifically on the AHCA, his campaign declined.

The Democratic Party has been pushing Wagner to comment specifically on the bill, including holding an event Thursday afternoon in Wagner’s district, with an event at York City Hall.

The Republican Party of Pennsylvania has endorsed the AHCA, and Congressmen Ryan Costello (R-Chester), Pat Meehan (R-Delaware), and Tim Murphy (R-Allegheny) have all voted for the AHCA in committee.

Governor Tom Wolf has been vocal in his opposition to the AHCA as well.

“That politicians in Washington are willing to throw tens of millions of people off their insurance plans and increase costs for seniors to achieve a political victory is unconsciousable. The CBO score confirms that Pennsylvanians, including seniors, people with disabilities and those in treatment, will be worse off under the AHCA and that any assurances otherwise were either untrue or disingenuous – or both,” Wolf said in a statement from his official office.