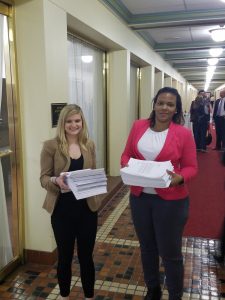 The Pennsylvania Democratic Party is pushing State Senator and Gubernatorial candidate Scott Wagner (R-York) for his stance on the Affordable Care Act (ACA) repeal.  The party submitted over 1,900 petition signatures to Wagner’s official office in Harrisburg calling on Wagner to end his stance on the repeal of the ACA.

“[Wagner] is running for statewide office, the the repeal of the Affordable Care Act is going to have very serious implications on Pennsylvanians… this is going to affect Pennsylvanians all throughout the commonwealth and he is going to have to answer to that, ” Pa. Dems Communications Director Beth Melena said in an interview with PoliticsPA.  Melena used to work in Governor Tom Wolf’s communications department before switching over to the party.

The signatures came from 63 counties across Pennsylvania.

“If you support our seniors, children, and working Pennsylvanians who have benefited from Obamacare, do the right thing and support affordable, quality health care for all,” the petition reads in part.

The GOP primary is still 14 months away, but the Democratic Party is acting like Wagner is already the nominee.  The intensity and focus of the attacks is reminiscent of the party’s messaging against during the re-election efforts of former Governor Tom Corbett, rather than messaging they have had over the last 2 years.

The party has been pushing Wagner on the ACA repeal, and to comment on the American Health Care Act, including holding a protest at York City Hall calling on Wagner to give his position on the bill.

PoliticsPA has reached out to Wagner’s campaign for comment.

Meanwhile Wagner’s campaign has been continuing the Senator’s statewide introduction and building its own narrative.

Wagner’s campaign released its second video today, about why Wagner is running for Governor.

“The reason for my candidacy is simple, I don’t do well when I hit the wall.  So I have chosen to take action and become the next Governor and be elected in 2018,” Wagner said in the video.

In the video, Wagner runs through the growth of the Republican caucus in the Senate since his arrival, growing from 27 members to a veto-proof majority of 34 members currently.

The video will help his campaign set the story of Wagner, and his time in the Senate and what drives him to run for Governor.

Update: “Scott Wagner is the ultimate Harrisburg politician, so it shouldn’t surprise us that he spends his time defending the legislature and the culture of Harrisburg instead of actually working to fix Harrisburg and get things done for Pennsylvania,” Melena said in an email.