PA Dems To Launch “Back to Blue” Tour 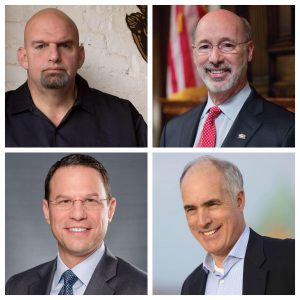 The push to mobilize voters for 2020 is about to begin for the Pennsylvania Democratic Party.

On Wednesday afternoon, the PA Democratic Party announced that they are launching their initial organizing push for the 2020 election with the “Back to Blue” tour.

“These rallies are a reflection of the energy and enthusiasm for Democratic victory we’re seeing across Pennsylvania,” said PA Dems Chairwoman Nancy Patton Mills. “Pennsylvania Democrats are working hard and showing up in every part of the Commonwealth. Our fundraising is rolling at a record pace, our ground game is up and running earlier than ever before, and our voters are fired up and ready to turn Pennsylvania back to blue. We are excited to share our progress and invite voters of all stripes to join our fight for affordable health care, better wages for working families, and an economy that works for everyone — not just Republican politicians and their wealthy friends.”

The tour is set to kickoff this Saturday, February 15 in Erie, followed by Scranton on February 22, and visits to Harrisburg, Monessen, and Bensalem on February 29.

In 2016, Donald Trump became the first Republican presidential candidate to carry Pennsylvania since 1988. Various stops in the tour include regions in which Trump made significant progress from previous GOP presidential candidates, including Erie County, which voted for President Barack Obama twice then voted for Trump in 2016 and Lackawanna County, where Sec. Hillary Clinton won by just 3.4 points after President Barack Obama carried the county by 27 points in 2012 over then-Gov. Mitt Romney.

While Republicans were riding high in 2016, after Trump’s victory, coupled with Sen. Pat Toomey (R) winning another term, they received a gut punch in 2018 with Democrats flipping a number of seats at various levels of government, while also seeing Wolf and Casey coast to double digit victories.

According to Politico’s 2020 Election Forecast, Pennsylvania is currently one of eight states listed as a Toss-Up for the upcoming presidential election.

The release also announced that the tour in coinciding with an “earlier-than-ever” surge of organizers hired throughout the state, announcing that the state party will have organizers in 10 counties by the end of February, with expansion continuing all the way through the April 28 primary election. The details of this effort added that the goal is to mobilize voters who have been “let down by the broken promises of Donald Trump and Harrisburg Republicans— who continue to attack affordable health care and keep Pennsylvania’s minimum wage the lowest in the country.”

“This early organizing surge gives us a big advantage as we gear up for 2020,” said PA Dems Executive Director Sinceré Harris. “This year, no voter will be left behind.”

While the Pennsylvania Republican Party did not respond for comment, the Republican National Committee said that the move shows that they are “finally” learning what key battleground states are on the map.

“While Democrats finally learn where key battleground states are on a map, Republicans have been in the commonwealth since 2016, with staff covering all 67 counties,” said RNC Spokesperson Michael Joyce. “Voters across Pennsylvania look forward to electing Republicans up and down the ballot in November.”

16 thoughts on “PA Dems To Launch “Back to Blue” Tour”