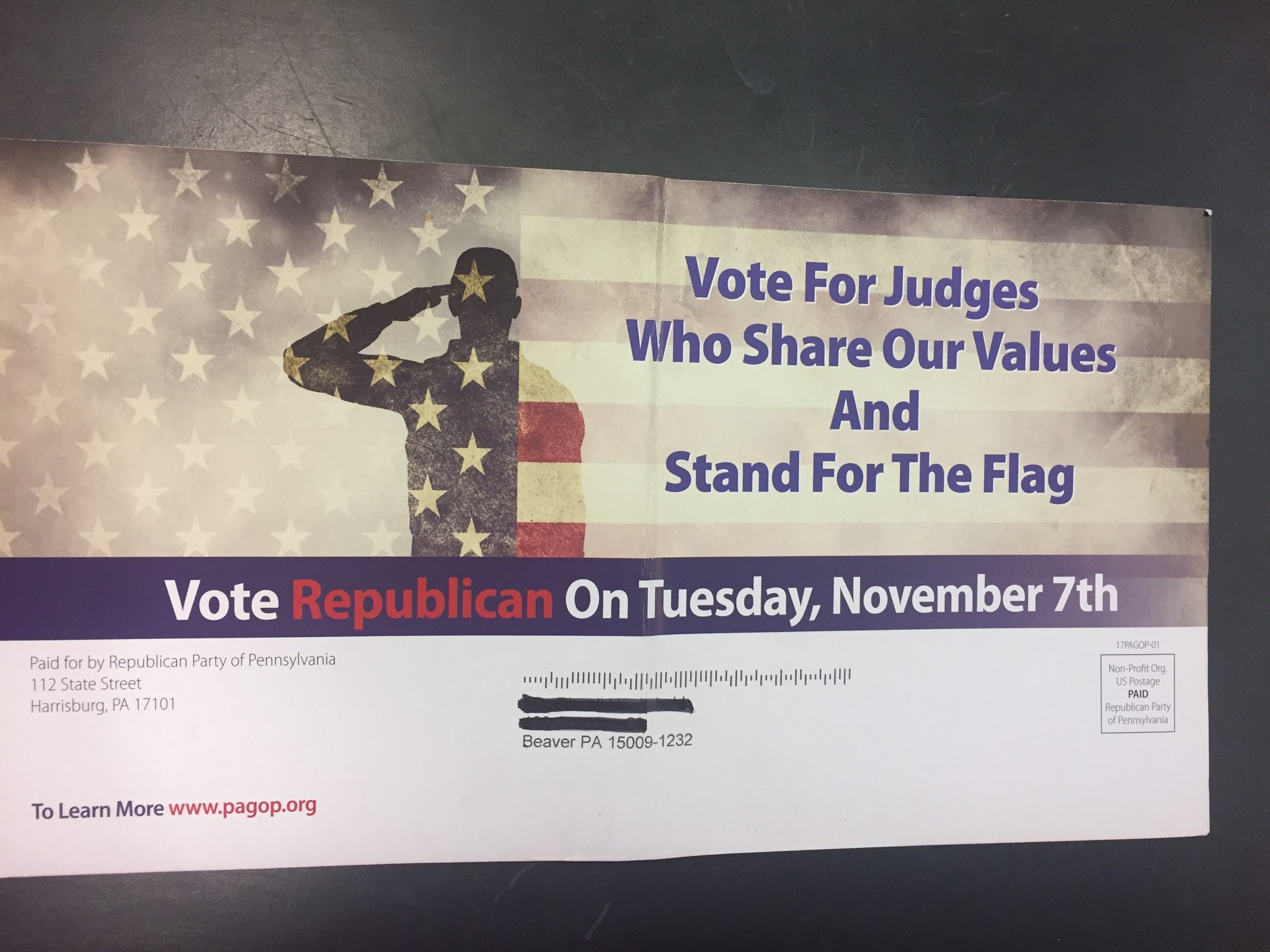 The mailer, that depicts a person saluting with the Flag across the mailer.  The words “Vote for judges who share our values and stand for the flag” are next to the person, with “Vote Republican on Tuesday November 7th” below.

Ceisler prefaces his issues with the mailer by saying that parties have the right to take “provocative stances to fire up their base” and has “never faulted the Republican Party for taking their best shots” at Democrats.  But he believes that the mailer crosses a line.

“I am shocked that the Republican Party would co-opt the sacrifice of Americans who served in combat to protect our Constitutional Rights, just to score political points. I am even more disturbed that they would directly challenge the patriotism of military families,” Ceisler said in a comment.

Ceisler, who served with the Army’s 75th Ranger Regiment in Afghanistan in 2016 and was awarded a Bronze Star, listed off the different familial connections between the Democratic judicial slate and the military, including Supreme Court candidate Judge Dwayne Woodruff’s Marine Officer son, and Superior Court candidate Judge Maria McLaughlin’s Army Veteran husband.

“By using a Googled image of a soldier saluting a flag beneath the words “Vote For the Judges Who Stand For Our Flag,” the Republican Judicial Slate has deliberately chosen to demean the sacrifice of the Democratic Judges who have shared their children, parents, and spouses with us,” Ceisler said.

Mailers of this nature are usually sent to voters who are likely to support the Republican candidates and are likely to be pushed to the polls by the message.

As election day gets closer for the judicial elections, campaigns and parties will begin to push stories against the opponents that stay on message, but will generate earned media to engage voters and increase the profile of the races.

“It’s now crystal clear that this isn’t your father’s Democrat Party. If there is an outrage here, it is the sad reality that Supreme Court candidate Woodruff and the Democrat machine will not stand against those who dishonor our flag and national anthem,” DiGiorgio said in a statement.

“No one questions the right of NFL players to exercise their free speech. We do, however, question their judgment, along with that of Supreme Court candidate Dwayne Woodruff. Our Republican judicial candidates stand to honor Americans of all races and ethnicities who put their lives on the lines everyday to protect our country.”

“We already know that Dwayne Woodruff lacks the courage to buck the far left wing of his party when it comes to the misguided and disrespectful act of highly paid athletes. We call on all Pennsylvanians to reject liberal judge candidates who will not defend our flag,” DiGiorgio concluded.

Disclosure: Ellen Ceisler was formerly married to Larry Ceisler, one of the owners of PoliticsPA.