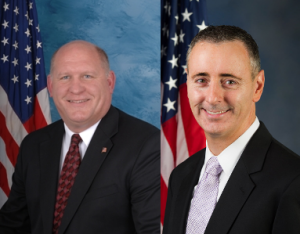 Pennsylvania Congressmen Glenn ‘GT’ Thompson (R-Centre) and Brian Fitzpatrick (R-Bucks) have both come out against the current form of the American Health Care Act (AHCA).

“I have read the American Health Care Act and cannot support the bill in its current form,” Thompson said, according to the Centre Daily Times.

Thompson’s main point of contention is the increased rates paid by seniors, who make up almost 125,000 of Thompson’s constituents.

“As a former licensed nursing home administrator, I also need better assurances that services for our most vulnerable populations will not be jeopardized,” Thompson said.

“After considering the current healthcare bill in a thorough and deliberate manner, I have concluded that, although the American Health Care Act focuses on several much-needed reforms to our healthcare system, in its current form I cannot support this legislation,” Fitzpatrick said in a statement.

Fitzpatrick cited the lack of focus in the bill on combating the opioid epidemic in the bill.

Both Thompson and Fitzpatrick left the door open to support the legislation if it is amended.

The Democratic Congressional Campaign Committee (DCCC) quickly jumped on Fitzpatrick, one of their targeted incumbents in 2018.

“After fueling the Republican flames for Obamacare repeal and promising to defund Planned Parenthood on the campaign trail, Representative Fitzpatrick has suddenly gotten cold feet,” DCCC spokesman Evan Lukaske said in a statement.

Congressmen Tim Murphy (R-Allegheny), Pat Meehan (R-Delaware), Ryan Costello (R-Chester), and Lloyd Smucker (R-Lancaster) have all voted for the AHCA in committee.  The Pennsylvania Democratic delegation is unanimously opposed to the bill.  Murphy published an op-ed in the Pittsburgh Post-Gazette today touting the benefits of the AHCA’s mental health provisions.