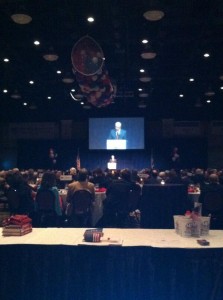 Republican state committee members from around the state converged on Hershey today to rally the faithful in a tough election year.

“Are you ready to send a message to President Obama that Pennsylvania is a red state?,” Gleason asked.

The Lt. Gov. took the stage next.

“We hired someone to fix [Pennsylvania’s financial state]; we hired Tom Corbett. And he’s working hard for all of us. Let’s be clear, we are not going to give [the Democrats] another chance,” he said. “I’ll tell you what we are going to do, we are going to work hard every day we are going to knock on every door in this state we are going to talk to everyo one of our neighbors and tell them that Corbett has the right vision. And on November 4th we are going to be celebrating another four more years.”

Congressmen Glen Thompson, Charlie Dent and Tom Marino introduced the governor with a string of football metaphors and gave Corbett a football helmet, calling him their team captain for the “Pennsylvania Super Bowl” on November 4th.

The Governor finally took the stage after dinner, looking lean and jovial, cracking a few jokes before he introduced the guest of honor, Mississippi Governor Haley Barbour.

“Jim and I, with your help, are going to win again in November,” he said, to great applause, before going into his full introduction of Barbour. “He has done it all, Haley Barbour. Let’s give him a warm Pennsylvania welcome.”

Barbour took the stage to a standing ovation as he recognized committee members with a warm, Southern drawl.

“We are a party that stands for individual freedom and personal responsibility. This is the party of freedom and I thank you for leading the party of freedom in this great state,” Barbour said. “I want to take a chance to talk to you like a party chair – you are the leaders of our party in this great Commonwealth and we’re all in this together because this is an important year for our party.”

Barbour applauded the work of Tom Corbett, talking about job creation, the failures of Obamacare and the role of the party in getting their friends to the polls in November.

He talked about the problems of conservative pure-ism, and also surprised everyone with a variation of a James Carville quote.

“We ascribe to the belief that Pennsylvania is Philadelphia and Pittsburgh with Alabama in the middle.”

Despite the warm reception Corbett received from committee members, it wasn’t a great week in polling for the incumbent.

According to Franklin and Marshall, only 23% of Pennsylvanians thought he deserved reelection. He did better with just Republicans, with 41% saying he deserved reelection, but another poll from Gravis found that just 38% of Republicans wanted to give Corbett a second term. While it’s unlikely that the Governor will have trouble in a primary, these numbers don’t bode well for the general election.