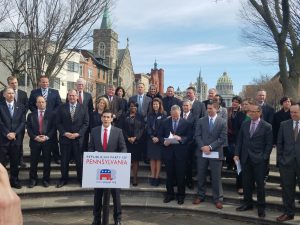 In the first major press event since the contentious Chairman election in January, the PA GOP pushed unity between the party, the legislature, and the judicial candidates.

“We are here today to say that we are unified in our efforts to elect our slate of seven judges this year,” DiGiorgio said.

Scarnati focused on the work the leaders and the party had to do together this year.

“All of us here, we need to be the people to go out and talk about the importance of electing this entire slate of judicial candidates,” Scarnati said.

I believe it is really quite important that we come together as a team to support our slate of candidates for this very important branch of government,” Turzai said in his remarks.

“I think we all look forward to joining together and making sure that this year we go seven for seven,” Reed said.

In odd year elections, where money is usually not raised in large amounts, support from elected officials can make a difference, as they can bring press coverage to events that otherwise wouldn’t get attention.  The endorsement of the leaders can also help boost fundraising efforts, especially in judicial elections.  In judicial elections, candidates themselves are not allowed to directly ask for money from donors.

The PA GOP is currently challenging the petitions of Judge Mary Murray, who was not endorsed and is running for Superior Court.  The hearing on the challenge is scheduled for Monday, March 27th.

Update: “We have very strong democratic candidates for the supreme, superior, and commonwealth courts that are committed to serving the people of Pennsylvania. They are unparalleled in their experiences and in their dedication to transparency and integrity,” Pa. Dems Press Secretary Brandon Cwalina said in an email.