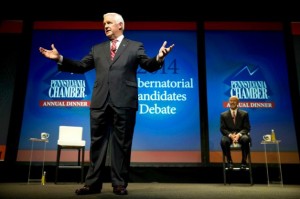 The debate came in the middle of the PA Chamber Dinner, so the event took place in a crowded dining room full of tables, people, and leftover food.

The crowd was decidedly more favorable to Governor Corbett which appeared to have an effect on both candidates.

The candidates gave fairly typical opening statements introducing themselves and their platforms.

The first question concerned the issue voters care the most about, namely education funding.

Wolf disputed the Governor’s attempt to assert that education spending has increased.

“Education has been cut,” he stated plainly.

The Democratic nominee also said that 27,000 educators in the state have lost their job under Corbett’s Administration.

Governor Corbett acknowledged the distress the issue has caused throughout the commonwealth.

Yet he also referred back to the culprits he has blamed in the past, including the stimulus spending, Governor Rendell and public sector unions. Corbett also called Wolf’s 27,000 number a “false number” because it included all those involved and not just teachers.

Wolf responded that he didn’t know how much money education would ultimately need which was a common refrain from the Democrat. Corbett hammered his opponent for not providing specifics.

Governor Corbett then performed his most impressive feat when he successfully dodged a direct question from moderator Dennis Owens about taking another “no new taxes” pledge like he had in his first term.

“My job is to be the steward of your money,” he said. When asked directly for a yes or no question he responded “That is my answer.”

The Gov. also claimed that the transportation bill was not an tax increase as some of his conservative critics have asserted.

Tom Wolf was then asked about his plans to raise taxes. Wolf said this was “a misconception”. Owens pressed him on whether he felt Pennsylvanians were paying enough in taxes or if they needed to pay more.

“Some people are paying too much right now,” he conceded before saying that “to create a fair tax system, some people will have to pay more.”

“Fairness is in the eye of the beholder,” Wolf said philosophically.

Things got tougher for the Democrat, though, when he was booed by the crowd when he stated that most people file their state tax returns separately.

Then, Owens asked Wolf if he would categorize the issues with pensions as a “crisis”. Wolf responded that this disagreement was mostly about semantics and that it was a problem that had the potential to grow into a crisis.

The focus then shifted back to Gov. Corbett and the lack of a severance tax. The GOP nominee countered that impact fees and other taxes were sufficient enough.

Wolf took the opportunity to once again draw attention to his plan for a 5% severance tax. When asked about specific figures he responded “I don’t have a crystal ball, I work better with calculators.”

This answer proves that Wolf is honest when he says he is not a politician, as while this statement makes sense for a businessman, it’s definitely not good politics.

Corbett ducked a question about raising the minimum wage while Wolf stated he supports an increase to $10.10 an hour.

In the final rapid-fire section, Wolf was questioned about his financial support from unions. He pointed out that these organizations mostly didn’t endorse him in the Democratic primary. Owens asked the incumbent why he is behind in the polls and Corbett countered that his was proud of his work but felt he could have handled the public relations better.

Overall, Governor Corbett was much more fiery, active and energetic. Wolf was a bit more laid back and was obviously trying to win over the audience. The problem was that those attending the dinner loudly applauded Corbett several times. Without a doubt it was a home game for the Governor although it wasn’t clear whether he scored a clear victory and if that would benefit him come November.