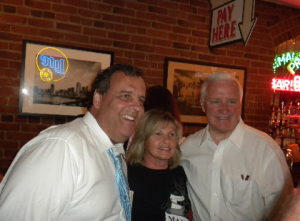 Tom Corbett may be struggling but he hasn’t been abandoned by his friends.

The Republican Governors Association (RGA) donated $3.5 million today to incumbent Tom Corbett’s campaign for reelection. This contribution joins the previous $1.8 million the RGA has already given Corbett in his fight against Democratic nominee Tom Wolf.

The $3.5 million comes at a time when three separate polls in the last few days have shown Corbett trailing by double digits.

The two Mid-Atlantic leaders have a close relationship and they even campaigned together last June in Pittsburgh. The New Jersey Governor (who may run for President in 2016) seems determined to prove Republicans can hold their own in the Northeast. As a result, despite likely protests from other vulnerable state GOP Governors, the RGA is standing behind Corbett.

The $3.5 million, though, is more than just a symbolic gesture. According to the Pennsylvania State Department’s 2014 campaign finance report, Corbett’s in-kind contributions top $300,000, while totals from his monetary contributions and receipts as well as rollover funds from the last campaign finance cycle exceed $11 million.

The Governor should have the funds and establishment support to last through these next few months as he fights for his political life.