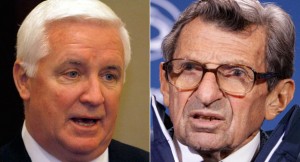 After the Sandusky scandal broke, Paterno’s role became a central topic of controversy when it was revealed that he had been notified of an abuse incident in 2001 but chose to tell the school’s athletic director rather than the authorities.

The impression formed that Paterno, the famous PSU figurehead who had been head coach of the football team since 1966 and was an assistant going back to 1950, at best neglected to follow through on the allegations and at worst attempted to cover them up.

As a result, Paterno was fired over the phone after a meeting of the Board of Trustees, of which Corbett is a member. Paterno was dealing with lung cancer at the time and died shortly thereafter on January 22, 2012.

Ever since, the perception has emerged that Republican voters in central PA have soured on the Governor because of his treatment of Paterno.

Personal reports of the Governor’s role during the board meeting are conflicting, with Corbett stating that he recalls not taking part in the vote. Ultimately, the board took a voice vote in which no one objected.

Gov. Corbett did assert, however, that he wasn’t informed that the board was going to deliver the news to Paterno by phone and says he would’ve advised against that.

“If I had known that, I would have insisted they do it in person,” Corbett said. “Man up.”

The AP reported that Corbett admitted some voters disapprove of his role but that his re-election won’t be decided by this issue.

“I think when it comes to an election, the vast majority of the people are going to vote on the two candidates, not just vote on Penn State,” he said.