Governor Tom Corbett, fighting to keep his gubernatorial position, released a new ad in his Corbett-Cawley campaign touting the increase in education funding under Corbett’s leadership.

The video, which stars his wife Susan Corbett, focuses on the $1.5 billion in education spending that Corbett signed off during his time as governor. Both Corbett and his wife are former public school teachers.

“So Tom and I are grandparents now,” the First Lady of PA starts off proudly. She goes on to talk about the child her daughter adopted, and how important he is in the Corbetts’ lives.

“I think what Tom worries about the most is what do we have to do to make Pennsylvania a better place for our children, for our grandchildren,” Susan continues. She mentions the fact that she and her husband were both teachers, citing this as one of the reasons that education is very important to both of them.

“He’s increased spending in the education department by $1.5 billion over what it was when he came into office,” she says. “Pennsylvania is at the highest it’s ever been for spending in education.” Susan also points out that PA is now among the top states in spending per student. 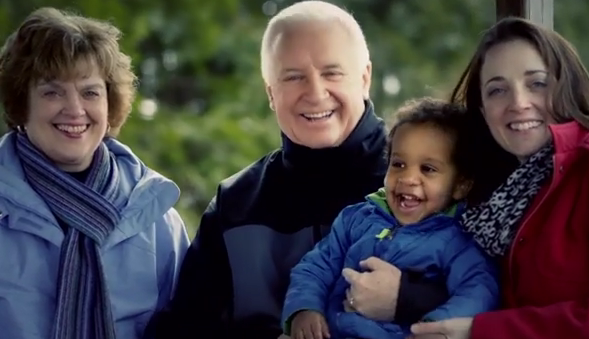 Rounding it up, Susan says that every child deserves a “good start” in their education, and it’s this devotion to students that drives her husband “every day he’s in office.”

Education has polled as the most important issue for Pennsylvania voters this year, and Democrats have been quick to hit Corbett on the lower levels of funding as compared to Governor Ed Rendell’s terms when the state received greater federal funding.

After being named the most vulnerable state governor in the country by the Washington Post for nine months running, Corbett is giving the gubernatorial race his all. His recently released campaign finance report places his total raised at $1.4 million, with nearly $6 million in cash on hand.

While Corbett’s only Republican challenger, Bob Guzzardi, is in the midst of fighting a petition challenge, his Democratic opponents are certainly giving him a run for his money. From the left-wing, Corbett faces former Revenue Secretary Tom Wolf, State Treasurer Rob McCord, Rep. Allyson Schwartz, and former PA DEP Secretary Katie McGinty.