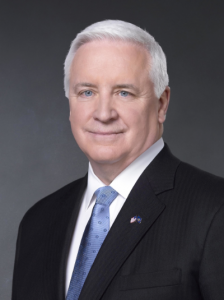 “And Wolf was a job killing bureaucrat,” the voice adds later on.

The ad rebukes Schwartz for her support of Obamacare and her pro-gun control stance.

“Schwartz has voted with Obama’s liberal agenda almost unanimously. Schwartz even helped write disastrous Obamacare. And Schwartz is so extreme on gun control, the NRA graded her an F,” the ad says.

As for Wolf, the ad discusses his past as Pa’s former Revenue Secretary — or, as the ad puts it, “the top tax collector.”

“But the real insult? Wolf is a millionaire, but he fought to increase taxes on average Pennsylvanians including higher taxes on home heating and the sales tax.”

The ad is further evidence that Corbett is bypassing the primary and focusing solely on the tough general election that is soon to come.