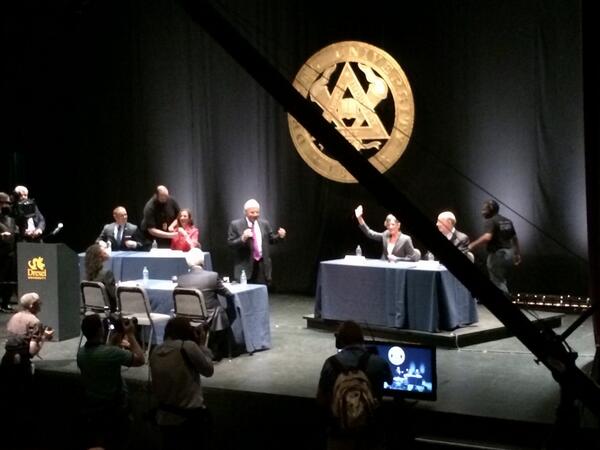 (Philadelphia, Pa.) — In the last forum of the gubernatorial primary, the candidates launched their final attacks against each other, but primarily against frontrunner Tom Wolf.

State Treasurer Rob McCord led the charge against Wolf, attacking not only his relationship with former York Mayor Charlie Robertson, but also questioning his qualifications for the highest executive office in the state.

“The worst training for building consensus is long term running a company as CEO,” McCord said, attempting to debunk the value of Wolf’s business experience.

“What disturbs me is that when [The Wolf Organization] had the opportunity to create jobs, they created them in Indiana,” McCord said later, whirling the poisonous accusation of outsourcing at the former Secretary of Revenue.

“[Governors] Rendell, Ridge, Thornburg went through tough primaries. The first person who had the primary cleared for him was Tom Corbett. We don’t want another untested Tom,” McCord continued, addressing a question as to whether negative campaigning hurts the eventual nominee.

McCord then fired shots over Robertson, saying that Wolf failed the Donald-Sterling-Leadership-Test by addressing Robertson privately, asking him to withdraw from the race, instead of attacking him publicly, and it was to this attack that Wolf had the strongest rebuke.

“We need a leader who will get things done, not just pound on their chest,” Wolf responded. “I categorically condemn what happened in York, and the racism of the police force. I wasn’t there at the time, I was in a small village in India. I absolutely condemn it.”

But still, Schwartz piled on.

“Tom is not willing to face the camera and really explain,” she said of Wolf’s relationship to Robertson. “The voters deserve answers.”

The one candidate who remained above the fray and focused on the substantive issues was Katie McGinty. Each time the moderators tried to pull her into a statement about Wolf’s past, she deflected to discuss public education, job creation and beating Governor Tom Corbett.

“What I hear voters talking about is that their child doesn’t have tutoring after school anymore,” McGinty responded to one such baiting question. “I would try hard to grow jobs, and start doing smart things that are right there: [accepting the] Medicaid expansion, and modernizing liquor stores.”

By closing statements, Schwartz and McCord had exhausted their assault on Wolf and returned to pitching their own qualifications.

“This is about priorities. Where can we find the dollars? Yes, there is revenue being left off the table by this governor,” Schwartz said shortly before closing. “The extraction tax is real; I will get it done. It will bring in $660 million dollars in the first year. My point is, we can find common ground.”

“I bring a wealth of experience and accomplishment that is unmatched on this stage,” she concluded.

“There’s been quite a bit of fighting in this campaign, but I want you to know that Katie McGinty is fighting for you,” McGinty finished, going on to discuss the importance of education funding and finding bipartisan consensus.

Wolf’s closer ended with his standard pitch about being an unconvential candidate, but one of his strongest answers came earlier in the evening when another candidate was asked if they would support the eventual nominee.

“If Tom Wolf is nominated, I will support him,” he began with a quip. “[When I was Secretary of Revenue] I did not take any perks, I paid my own way, I contributed my salary to charity, I drove my own Jeep and my wife and I put everything into a blind trust. If you want my ethics, look at that.”

One of McCord’s best answers also came during this portion.

“Of course, I will support any of these three other candidates,” McCord responded. “But the question is, why not the best? If we elect someone who turns the election into an auction instead of an election…the Democratic Party will be in trouble in the fall.”

Due to generous underwriting, the forum was broadcast on over a dozen television stations tonight and with radio and rebroadcasts, would be shown more than 30 times.