While other candidates are trying to tear Tom Wolf down, Katie McGinty is focusing on her own attributes.

As a way to separate herself from her fellow candidates, gubernatorial candidate McGinty’s latest ad, entitled “Problem Solver,” displays the former DEP Secretary as a hard-working and results-driven politician. 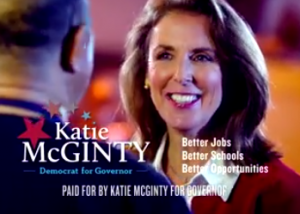 She isn’t a millionaire like candidate Tom Wolf, and she also has not held a political office for most of career like Allyson Schwartz. That is what makes McGinty different.

The ad also comes amidst the controversy surrounding candidate Rob McCord’s slanderous ad that paints Wolf as a supporter of a former racist, Charles Robertson. McGinty, however, is not taking the bait; she said that she will abstain from adding to the mudslinging.

“My Democratic opponents are fighting with each other, but my focus is on fighting for hard-working families,” McGinty said. “As Governor, I’ll clean up Harrisburg by enacting a total ban on gifts to politicians. And I will fight for Pennsylvania families by restoring Tom Corbett’s cuts to public education and fight to make the Affordable Care Act work for Pennsylvanians by expanding Medicaid and creating a state health insurance exchange.”

As noted above, the ad, aside from the opening, discusses many of the things her ads have covered in the past: her humble beginnings, her job creation history, her commitment to education, and, most recently, her support of Obamacare.

“Problem Solver” shows McGinty taking the high road by avoiding negative ads and instead discussing her credentials for governor. The ad will air throughout the state in the coming days.