“The charge of racism is in the air in Pennsylvania,” Matthews starts the segment. “The frontrunner Tom Wolf is leading his opponents by 25 points which explains a lot of what’s going on here.”

Matthews then outlines the facts: Robertson was acquitted of second degree murder and Wolf helped convince him to withdraw from the race after he was charged. 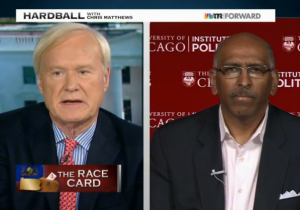 “I’m crying foul and I’m not the only one,” Matthews said, and then brought on former Democratic Governor of Pennsylvania Ed Rendell.

“You become obsessed with winning, but decency has to prevail,” Rendell said on the segment. “Never put something on that you know isn’t true.”

But Rendell doesn’t come to this issue with a spotless record himself. He, too, was accused of running misleading and inflammatory ads in the 1987 mayoral race. He aired an ad showing burning houses and suggests that MOVE is the only thing Mayor Wilson Goode would be remembered for. Police bombed a house the killed 11 people including the leader of MOVE, an African American organization. That ad was not mentioned in the MSNBC segment.

“I think you’re right Chris, this is a form of racial opportunism,” Steele, who is African American, said.

“I don’t understand why you foul this late in the game,” Matthews mused. “I think Bugs Bunny can beat Tom Corbett.”

McCord was invited but declined to be interviewed on the segment.

He’s received quite a bit of flak for this ad, including statements from Allegheny County Executive Rich Fitzgerald and Senator Bob Casey, asking him to take down the ad.

“As Democrats, we are looking forward to defeating Tom Corbett in November”, said Smith. “The best way to do that is to show voters that we as Democrats can offer them a better alternative; better policies and better politics. We need to show Democrats and Republicans across the commonwealth that we can offer Pennsylvanians a brighter and more hopeful future. It’s hard to do that when in our own primary there is an ad representing the absolute lowest of political attacks”.