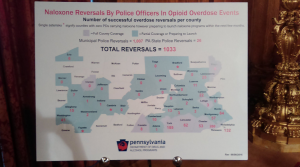 Gov. Tom Wolf surrounded himself with top law enforcement and public health officials on Monday to mark an early milestone in his administration’s fight against opioid addiction and abuse.

Naloxone is a prescription nasal spray that can reverse the effects of an opioid overdose. It can be obtained at most pharmacies by anyone requesting it, with Dr. Levine’s October 2015 standing order acting as a statewide prescription.

Wolf said he has allocated $34 million of his 2016-17 budget – and expects $18 million from the federal government – for construction of 50 treatment centers across the state and noted strong bipartisan support for changing the way the state and its agencies handle opioid addiction and abuse.

“We all recognize that we cannot arrest our way to a cure – we have a criminal justice problem here. There are people who are preying on victims of substance abuse disorder, and we’ve got to treat them as the criminals that they are – but there are too many people in our prisons who are suffering from medical problems,” Wolf said.

Lt. Gov. Mike Stack said Pennsylvania, and the nation as a whole, are “in the midst of the worst drug epidemic in recorded history.”

“At least seven Pennsylvanians die every day of a drug overdose,” Stack said. “Nationwide, we are likely to lose more Americans to overdose this year than we lost in all 12 years of the Vietnam War. That’s a terrible human tragedy.”

The Wolf administration has worked to place 450 prescription drug take-back locations across the state, where people can safely dispose of extra and unneeded medications. The administration is also working to implement a “warm handoff” policy, where those who have been saved by Naloxone will be taken for immediate follow-up substance abuse treatment once medically cleared at the hospital.

Before beginning the press conference, Wolf commented on the shooting at an Orlando nightclub early Sunday morning that left 49 people dead and 53 injured.

“That was a tragedy. That was an act of terror. It was a hate crime. It was the worst evidence of mass shooting that’s ever happened in this country, ever. We need to understand as Pennsylvanians, as Americans, that we are better than this. The evil that showed itself, reared its ugly head over the weekend is not us. I want to make sure that the families and the loved ones of the victims understand that Pennsylvanians extend their deepest sympathy and their deepest condolences to all who suffered over the weekend,” Wolf said before holding a moment of silence.