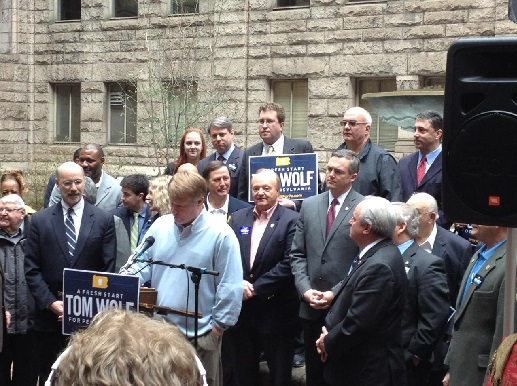 Situated in the Allegheny County Courthouse courtyard, the Democrats and their supporters praised the businessman’s credentials

“I believe that Tom Wolf, who has built a business that makes its products in America and directly competes with China, has the vision to make Pennsylvania a leader in American manufacturing and give our state a fresh start,” said Congressman Doyle.

Wolf was moved by the support shown to him.

“I am humbled to have the support of Congressman Doyle, County Executive Fitzgerald, Mayor Peduto, and Nancy Mills and I am thrilled to join with them to fight for a fresh start for Pennsylvania,” Wolf said. “These great leaders are working together to rebuild Western Pennsylvania’s economy and strengthen the middle class. Their vision and efforts to revitalize Pittsburgh and Allegheny County is exactly the model I will follow as governor, and with them, I know we can be successful.”

Much of the focus of the endorsement event was on Wolf’s business savvy and his ability to run a successful company, as Doyle mentioned.

“We need to put a businessman, someone who understands how to grow the commonwealth, into the seat of governor,” State Rep. Ed Gainey said.

In discussing Wolf’s now-famous profit sharing policy, Fitzgerald said that the former Revenue Secretary did “not just do it because he is a great guy — he did it because it was smart business.”

Wolf has recently become the frontrunner for the Democratic nomination according to recent polls commissioned by Franklin & Marshall, Robert Morris, and Harper. His meteoric rise in the polls coincided with his extensive advertising campaign, which included multiple commercials and a radio ad.

Democratic Chair Mills said, “It’s not just the commercial — but the message” when it comes to Wolf.

Regardless, the mass support this early on in the campaign is uncharacteristic of Western Pa. Democrats.

“Tom, the West is committed to you,” Gainey said.