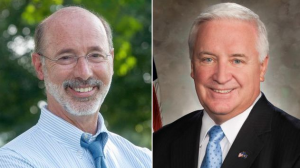 Another poll, another piece of bad news for Governor Corbett.

This, however, might be the worst piece of polling news yet.

The challenger is leading the incumbent by 24 points. This advantage is actually an increase from the twenty point lead Wolf held in Quinnipiac’s June poll.

Breaking the poll down by groups and issues provides little solace to the Corbett campaign.

Wolf leads 53% to 39% among independents while capturing 91% of Democrats and a surprising 28% of Republicans.

Nor can the Corbett-Cawley team console themselves with the fact that over fifty days remain until the election. 84% of voters say their mind is already made up compared to just 15% who might change their mind.

In terms of issues the voters found to be the most important, they broke down this way: 32% said economy/jobs, 25% responded education, 17% cited government spending and 15% listed taxes.

Views on the Candidates

The Democrat also leads Corbett on all questions of character traits.

58% believe Wolf cares about their needs and problems compared to just 27% who say he doesn’t. Only 35% of voters think that Corbett cares while a distressing 56% believe he doesn’t.

Lastly, 61% say Wolf has strong leadership qualities while only 18% counter that he does not. Corbett’s 50% to 42% margin is much smaller.

Perhaps most worrying for the Governor’s campaign, though, are the following numbers.

51% of Wolf backers say their support is primarily a vote against the Governor. Furthermore, 50% of respondents view the Democratic nominee favorably while just 22% view him unfavorably.

Governor Corbett, however, is viewed favorably by just 33% of respondents while 55% have an unfavorable view of him.

“A stunningly bad showing for Pennsylvania Gov. Tom Corbett who is clobbered across the board on issues, leadership and other character traits by a candidate who was unknown to most voters earlier this year,” said Tim Malloy, assistant director of the Quinnipiac University Poll.

This Quinnipiac Poll surveyed 1,161 likely voters from September 3rd to 8th and involved live interviews via landlines and cell phones. The margin of error is plus or minus 2.9%.