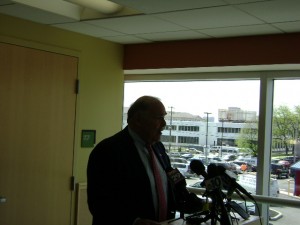 When a primary contest gets too negative, party elders usually try to temper the waters and there likely isn’t a more powerful or respected elder in the PA Democratic party right now than former Governor Ed Rendell.

This morning Gov. Rendell held a press conference at the Fresh Grocer on Broad Street near Temple University to comment about the recent developments in the race, specifically Rob McCord’s ad attacking Wolf for his association with former York Mayor Charles Robertson.

“As you know I have refrained from endorsing in this race, and I’m not here to endorse, but rather to correct the record,” Rendell began. “The ad that Rob McCord has put on TV is wrong, ill-conceived, and not the type of ad I’m proud to see in politics.”

He asserted that Tom Wolf is not a racist and has in fact been part of the solution concerning York’s troubled past. Rendell also brought up the fact that Wolf donated $20,000 to McCord’s campaign for State Treasurer in 2008.

He went on to call the ad “not correct, not true, not appropriate, it’s wrong,” and suggested the McCord campaign was trying to piggyback on the recent fervor around the comments of Clippers owner Donald Sterling.

“Mr. McCord is better than this,” Rendell said. “This stuff gives politics a bad name.”

When asked if the ad should disqualify McCord as a candidate, the Governor disagreed yet also qualified that “people should take it into account” when deciding whether or not to support McCord.

The Governor also answered that he did not reach out to McCord before this event because “I know what he’d say, he’s keeping them [the ads] up.”

Concerning why he thought the State Treasurer would run such an ad, the Governor posited that consultants likely talked him into it given his place in the polls. When asked about Rep. Schwartz’s attacks against Wolf, Rendell was less fervent but did note that Wolf’s family has given $50,000 to Schwartz’s campaigns.

Praise for Wolf and McGinty

“Tom Wolf is a good man, a decent man,” Rendell said of the front-runner. “Tom Wolf is no way, no how, no space racially insensitive.”

In contrast to his decision not to talk with Rob McCord beforehand, Rendell did admit he contacted the Wolf campaign in order to get details on the contribution that McCord had accepted from Wolf.

Additionally, Rendell took the time to praise the positive way Katie McGinty has managed her campaign.

“It doesn’t matter what polls show, you should never lose your integrity,” he said. “Katie McGinty deserves credit for the type of campaign she’s run.”

“The Wolf campaign doesn’t need my help,” he answered.

It’s important to point out that both Wolf and McGinty served in Rendell’s cabinet during his time as Governor, Wolf as Department of Revenue Secretary from 2007 to 2008 and McGinty as Secretary of the Department of Environmental Protection from 2003 to 2008. Therefore, it is not a shocking development that he would have nice things to say about both of them.

According to Thomas Fitzgerald of the Philadelphia Inquirer, Democratic Sen. Bob Casey also called on McCord to pull down the ad, calling it “offensive”.

Rob McCord has scheduled a press conference at 3:00 today to “discuss issues of race and leadership in the Democratic Primary for governor.”

One last note for those who are interested, I got the chance to talk briefly with the Governor after the press conference and asked the noted Eagles fan who he thought they would take on Thursday in the first round of the NFL Draft. Rendell felt head coach Chip Kelly would likely go with a wide receiver and mentioned Oregon State’s Brandon Cooks and USC’s Marqise Lee as possibilities.