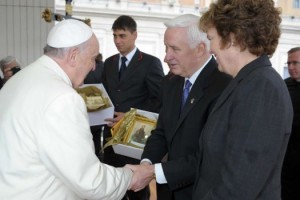 With Jack Wagner’s announcement that he’s dropping out of the race, we’re down to the final four in the heated Democratic gubernatorial primary.

Once again, we’ve compiled all the news in the state’s top contests that you may have missed in our weekly round-up.

Sometimes the best thing to do when you’re having trouble (or low poll numbers) at home is to get away. So, Governor Corbett decided to take the opportunity to jet over to Vatican City to visit the reigning TIME Person of the Year, Pope Francis.

The Governor traveled as part of a delegation that included Philadelphia Mayor Michael Nutter and Archbishop Charles Chaput in an effort to convince the pontiff to visit Philly during the World Meeting of Families in September 2015.

While the delegation had their private meeting with the Pope cancelled, they did all get a chance to meet the head of the Catholic Church face-to-face for a few minutes.

“We invited him, along with the Archbishop and the mayor, to come to Philadelphia for the World Meeting of Families,” the Governor stated. “We’d be more than happy to have him there.”

While it’s unclear whether the Pope will visit Philadelphia, Corbett still got valuable face-time with the world leader. Considering that about 30% of Pennsylvania residents are Catholic and Pope Francis’ approval rating stands at 63% any association at all with the pontiff is worth its weight in political gold.

In an attempt to both fill in a bit of his personal background and showcase his commitment to public service, Tom Wolf had his old Peace Corps Director describe his work in India.

Richard Williams, Wolf’s superior during his time in Odessa, India from 1968 to 1971, posted an essay on Wolf’s official campaign website about the candidate’s experience in the Peace Corps.

“Although Tom was only between the ages of 19-21 during this time, he showed the wisdom and maturity of a grown man who could lead by positive action at the right time,” Williams writes.

He goes on to tell how Wolf became convinced that growing rice would best aid the farmers and how the future gubernatorial candidate taught himself and then others how to reap high yields from the crop.

“Tom’s demonstrated qualities of intelligence, adaptability and leadership exhibited by his work in India has carried over into every facet of his professional career, whether in the non-profit sector, business sector, or political sector,” Williams asserted.

“I stand with Tom because I know his commitment to helping people, to doing the right thing, and making the lives of Pennsylvanians better is genuine,” he concluded.

“It’s an honor to be unanimously endorsed by the Beaver County Democratic Committee,” said McCord. “From west to east, and throughout the Commonwealth, working families agree that we need a new direction for our state, and I know what they are going through. So, I’ve dedicated myself to improving our schools, raising the minimum wage, repairing our communities, and making the natural gas drillers pay their fair share.”

“Unanimously endorsing Rob McCord for governor was an easy vote for the Beaver County Democratic Committee because he is the right candidate for the job, and is the only one who can defeat Tom Corbett in the general election,” said former Beaver County Commissioner Dan Donatella. “We were certainly impressed by Rob’s campaign platform, but we were more impressed by his ability to get things done in Harrisburg and his unshakable dedication to fighting for Pennsylvania’s working families.”

The State Treasurer also made a bit of history this week thanks to an amicus curiae brief he filed to the U.S. District Court for the Eastern District of Pennsylvania in the case Palladino v. Corbett.

The case, which was filed last year, seeks to overturn the state’s ban on same-sex marriage.

“There can be no doubt that Pennsylvania’s marriage law acts to disadvantage, as a separate class, same-sex couples by purposefully refusing them state recognition of their relationship and thus the derivative rights, presumptions and protections normally associated with the legal status of marriage,” the brief states.

According to Philadelphia Gay News, McCord is the first statewide elected official to challenge the PA law and the first State Treasurer to file an amicus brief against their state’s ban on same-sex marriage in the country.

“We were asking ourselves the question, How does the lack of marriage equality affect what we do?” McCord told PGN. “Fairly quickly we said that, in several areas of our expertise, we are operating in a way that is failing people in terms of their civil rights because of this law.”

Finally, we finish with an accusation in the Lt. Governor’s race from Harrisburg City Councilman Brad Koplinski that one of his opponents, State Sen. Mike Stack, is engaging in political opportunism.

In a press release titled, “Koplinski says Mike Stack’s Pot Proposals Don’t Pass the Smell Test” (get it?) Koplinski accuses the legislator of only supporting marijuana decriminalization as a ploy to win votes.

“Mike Stack has been in the Legislature for nearly fifteen years without expressing any concern about Pennsylvania’s pot laws,” Koplinski said. “Now, as as the race for Lt. Governor enters the final stretch, he’s suddenly discovered decriminalization of possession of small amounts of the the drug as an issue. This is a clear example of a politician responding to the polls and not an example of the leadership Pennsylvanians want and deserve from their elected officials.”

The City Councilman goes on to explain that he also supports decriminalization yet he still sees Sen. Stack’s action as a failure in leadership.

“In my view, leadership is about taking a stand on difficult issues, not joining the herd on easy ones as indicated by the polls,” he concluded. “Marijuana may have a distinct odor, but it can’t conceal the blatant political motivation behind Sen. Stack’s proposals.”