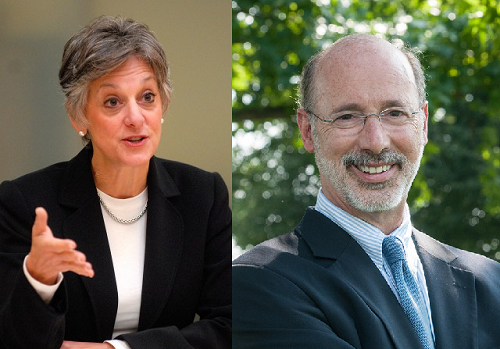 After months of congenial forums, last night the Democratic candidates for governor gave us a real debate.

In addition to the regular agreement on a myriad of issues, former Revenue Secretary Tom Wolf’s personal loan became a hot topic after Rep. Allyson Schwartz put him on the hot seat, asking him to disclose the terms of the loan.

Last year, Wolf wrote a $10 million check to his campaign and it was recently revealed that about $4 million came from a loan he took from M&T bank, which he says was secured with personal assets.

In February 2014, at a gubernatorial candidate’s forum hosted by WHYY, Tom Wolf said, “I’ll share whatever…I’ll be happy to share whatever anybody wants to see.” As the campaign has drawn on, Wolf has not lived up to his promise of transparency. Tom Wolf owes Pennsylvania straight answers to some simple questions.

· What was the amount of the loan Wolf took to fund his campaign?
· What did Wolf use as collateral when he borrowed money to fund his campaign?
· If elected Governor, how will Wolf repay the loan?
· Will Wolf release the bank loan papers to the people of Pennsylvania?
· What does it mean that Pennsylvania will have a Governor millions in dollars of debt to a major banking institution that he might not be able to repay?

According to the Wolf campaign, the terms of the loan were already released in his statement of financial interest. He has yet to release the bank loan agreement but says that he will.

“Tonight, Allyson Schwartz proved that she is a typical politician who is behind in the polls. Tom Wolf answered all of her questions because he wants to be a different kind of leader for Pennsylvania,” Wolf spokesman Mark Nicastre said in a statement after the debate. “Tom Wolf focused on the issues that matter – education, economy, and government reform – while talking about how he will give Pennsylvania a fresh start. That is the kind of leadership Pennsylvania needs.”

So far, State Treasurer Rob McCord and former DEP Secretary Katie McGinty have stayed out of the fray on this issue, but the back and forth between Wolf and Schwartz certainly changes the dynamic of this race.

Schwartz has consistently placed second in independent polling in the race, but falls at least 20 points short of Wolf. She recently began her television ad campaign, but with just six weeks left until the election, going negative against the frontrunner may be the only way to regain ground.