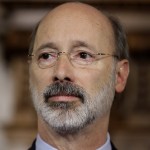 The Pennsylvania gubernatorial race somehow became all about Vietnam yesterday.

Specifically, what the candidates were doing during the conflict. The Tea-Party affiliated group “Veterans and Patriots United” is claiming that Wolf failed to report for a medical exam.

“It’s marked here by the draft board: ‘FR’ — failed to report. He did not show for his pre-induction physical,” said Veterans and Patriots United’s Sam DeMarco.

The Wolf campaign countered that “FR” actually stands for “forwarded report”. During the war, the Democratic candidate was in the ROTC for a year and then spent three years in India as part of the Peace Corps.

“I went off and volunteered for the Peace Corps. And when I came back, the reserve officer training program was no longer being offered on campus. I was 1-A that year and my number didn’t come up,” Wolf explained.

After this attack against Wolf, FreshStartPA’s Mike Mikus decided to level his own against Governor Corbett and his time in the National Guard.

“I think it’s a bit hypocritical for his campaign to launch this type of attack when he himself took affirmative action to join the National Guard specifically to avoid going to Vietnam,” Mikus charged.

This caused yet another volley as Corbett-Cawley Press Secretary Billy Pittman responded to the response.

“It’s appalling that Tom Wolf and his campaign are disparaging the commitment and sacrifice of Pennsylvania’s national Guard Forces,’ Pittman said.

With Wolf up 17 points in the latest Quinnipiac Poll and the last gubernatorial debate taking place tonight, this attack seems to represent a last-ditch effort to harm the front-runner. October is the time to throw everything against the wall to see what sticks. It is doubtful, though, that this attack will achieve its goal.

While the Vietnam War was a seminal event for Baby Boomers, the war ended four decades ago. As a result, the candidate’s actions during the late 1960’s and early 1970’s are unlikely to make a difference as voter decide in 2014 who can best lead the commonwealth of Pennsylvania.