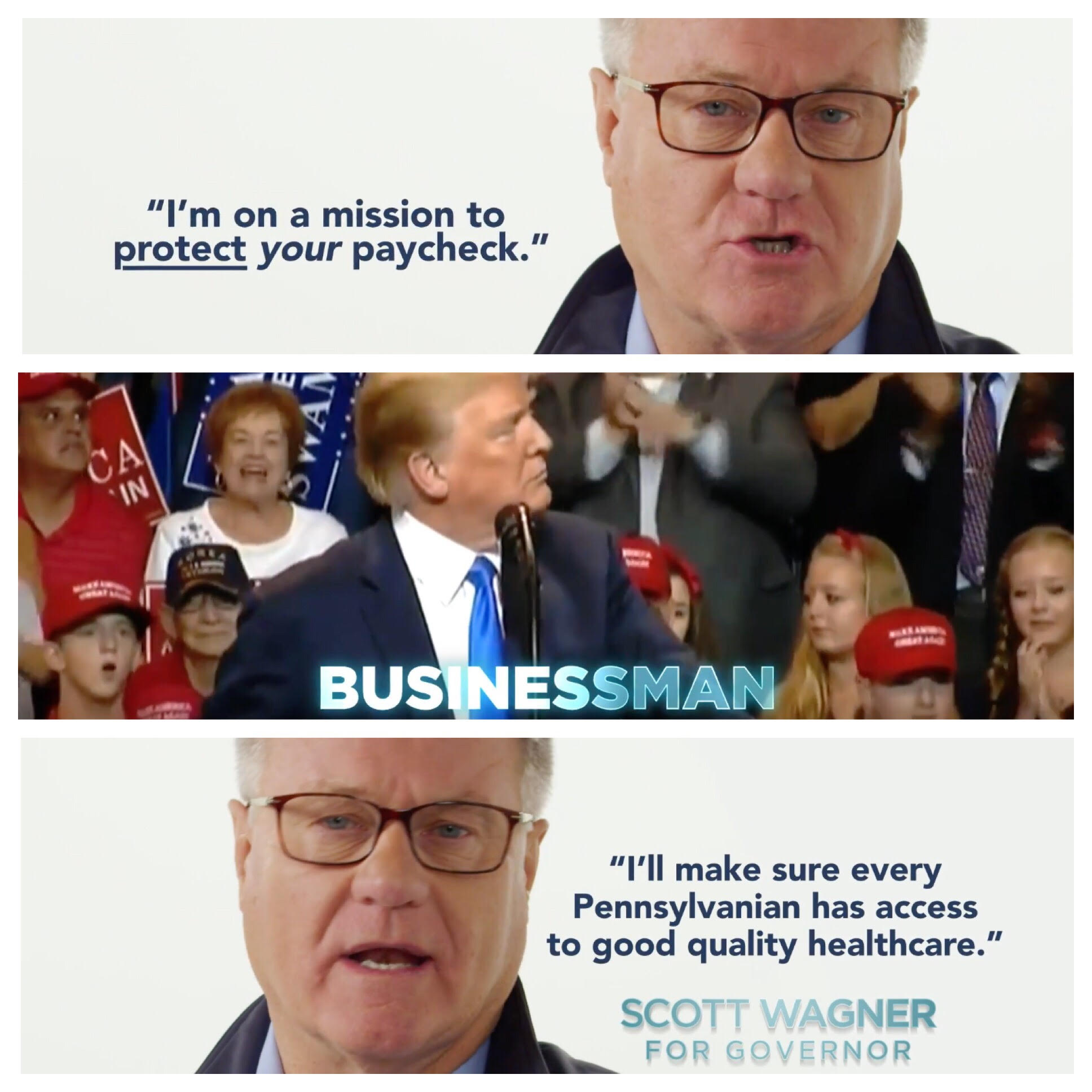 Down the stretch with a substantial ad buy.

In a press release, the Wagner campaign describes it as “a statewide television blitz that will continue until election day.”

Two of the ads claim that if elected Governor, Wagner will lower taxes and provide quality health insurance for all Pennsylvanians.

Wagner’s 30 second ad, “Quality Healthcare” shows the GOP candidate walking with employees of his company, Penn Waste, detailing the health insurance he provides to those he employs and blaming Wolf for an increase in health insurance prices in Pennsylvania.

“My company’s health plan covers pre-existing conditions and we take care of each and every person who works there,” Wagner says. “Under Tom Wolf, healthcare premiums are going through the roof.”

PennLive writes that Wagner’s campaign has rarely touched on healthcare insurance through television ads throughout the campaign thus far, but releases this ad at a time when many GOP candidates are highlighting the topic.

Wagner’s second 30 second television ad, “School Taxes” follows a theme that he has harped on rather often, painting himself as the candidate who will not raise taxes, while Wolf is attempting to do the opposite.

“How about those school taxes?,” Wagner asks in the beginning of the ad. “Seniors are being forced out of their homes.”

Wagner details his time as a state Senator opposing the Wolf administration’s tax plans and believes if his opponent gets another term, he will try to raise taxes once again.

“I’m on a mission to protect your paycheck,” Wagner says later in the ad.

The Wolf campaign finds these new ads to be false and an attempt to distract voters.

“Scott Wagner’s latest ads are a desperate attempt to distract voters from his disastrous record,” said Karissa Hand, Wolf’s campaign Deputy Communications Director. “The truth is that Wagner as governor would jeopardize the health care of 5.3 million Pennsylvanians with pre-existing conditions, tax seniors’ retirement accounts, and side with corporations and big oil and gas over middle-class families.”

In Wagner’s press release debuting these ads, they cite a Politico/AARP poll conducted on Oct 1-2 with Wolf leading Wagner 48-36 and believe that the incumbent is “losing ground” and discuss the strategy of making the ad buy in the final weeks of the campaign.

“Outspending us 7-1 has done little for Tom Wolf, given that more than 50 percent of Pennsylvanians still won’t vote to give him a second term,” said Campaign Manager Jason High. “On the other hand, we have conserved our resources to be able to make significant television buys down the stretch when most voters are paying attention. As these ads make it clear to the people of Pennsylvania that Scott Wagner is the only candidate in this race who will lower taxes and health care costs, we’re confident he will be elected on November 6th.”

The final ad is a 15 second spot titled, “One Hell of A Governor” that shows Trump at a campaign rally expressing his support for Wagner.

“He’s going to be one hell of a Governor,” Trump says while at the podium of a recent rally in PA. “He’s tough, he’s smart, Scott Wagner.”

FiveThirtyEight currently has the race listed as Solid Democratic.