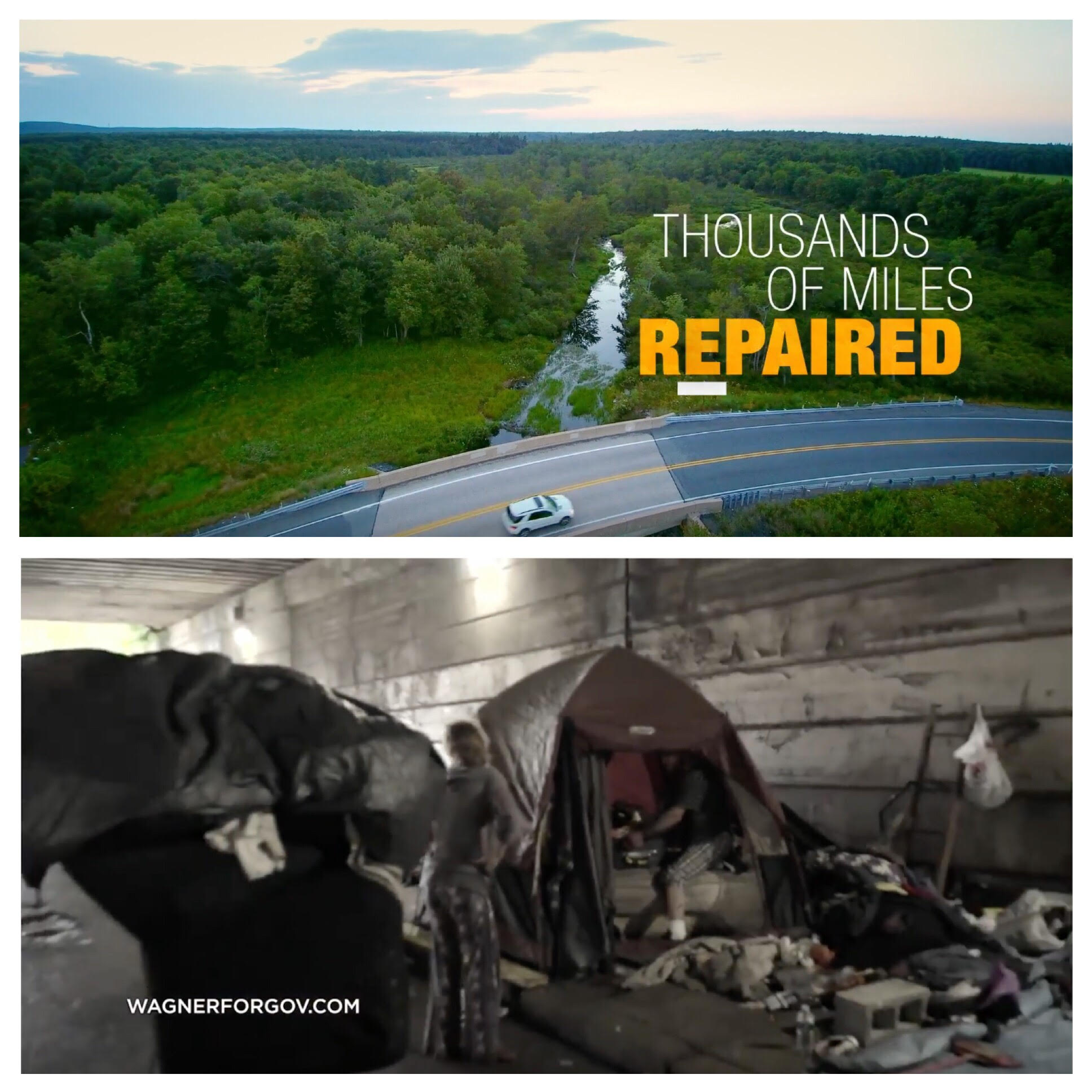 Gov. Tom Wolf and Republican challenger, Scott Wagner are airing two ads in the final week of the campaign that portray two completely different images of the current state of affairs in Pennsylvania.

Last week, Wagner debuted a series of new television ads as a part of a “statewide television blitz” that included their campaign spending $750,000 in ads from Oct. 22-28.

This week, Wagner’s campaign announced it is continuing their “advertising blitz” by spending $1 million on ads in the final full week of the campaign. Their ad released earlier this week accuses Wolf of neglecting the city of Philadelphia.

“If you want to see the failures of Tom Wolf’s policies, just drive through Philadelphia,” Wagner says in the beginning of the 30 second spot, Poverty. “Rampant crime, failing schools, and exploding poverty.”

The ad continues to state that Wolf is beholden to special interests in Harrisburg and will not solve the issues of Philadelphia.

“Scott has been clear that it is unacceptable Pennsylvania is home to the poorest city in the country and to so many other struggling communities,” said Campaign Manager Jason High. “By focusing on education, job training and business friendly policies, Scott will eradicate the poverty Tom Wolf’s failed policies have brought to our cities.”

The Wolf campaign believes Wagner’s record does not indicate he would help the city of Philadelphia.

“Scott Wagner is trying to run from his disastrous record, but the truth is that he supported Harrisburg Republicans’ billion dollar cut to education that devastated Philadelphia schools and led to massive layoffs, program cuts, and forced Philadelphia schools to the brink of not being able to open on time,” said Karissa Hand, campaign Deputy Communication Director. “Wagner would take Pennsylvania backwards by restricting access to quality, affordable health care, gutting education funding, and taxing seniors’ retirement accounts.”

Wolf’s campaign has taken to television this week debuting a new ad, while also playing an ad released earlier in the year.

The new 30 second ad, “First Four Years,” highlights a number of issues the Wolf campaign is boasting about during this current term.

“Governor Wolf has spent the past four years moving Pennsylvania forward by prioritizing the issues that are most important to Pennsylvanian families,” Hand said while citing the specific statistics mentioned in the ad. “He did all of this while balancing Pennsylvania’s budget and eliminating our structural deficit, resulting in the first deposit in Pennsylvania’s rainy day fund in nearly a decade.”

Wagner’s campaign believes the decision is clear on Tuesday of what each candidate stands for.

Wolf’s campaigns other 30 second ad, that they have brought back on air, “Hold Us Back” details the reason he ran for governor in the first place.

“Ordinary Pennsylvanians live lives that have many, many challenges,” Wolf says in the beginning of the ad. “One of the reasons I ran for this office was because I wanted to move Pennsylvania forward and I knew to do that I had to take on the powers that be and change the way business was done in Harrisburg.

In the ad, Wolf goes on to detail some of the specific policies that he thinks have benefitted Pennsylvanians.

Their campaign also showcases some of the initiatives they’d like to tackle if given another term.

“In a second term, Governor Wolf will continue to fight for ethics reforms, including a gift ban for all public officials, “No Budget, No Pay” legislation, gerrymandering reform, campaign finance reform, and public official expense reform,” Hand said.