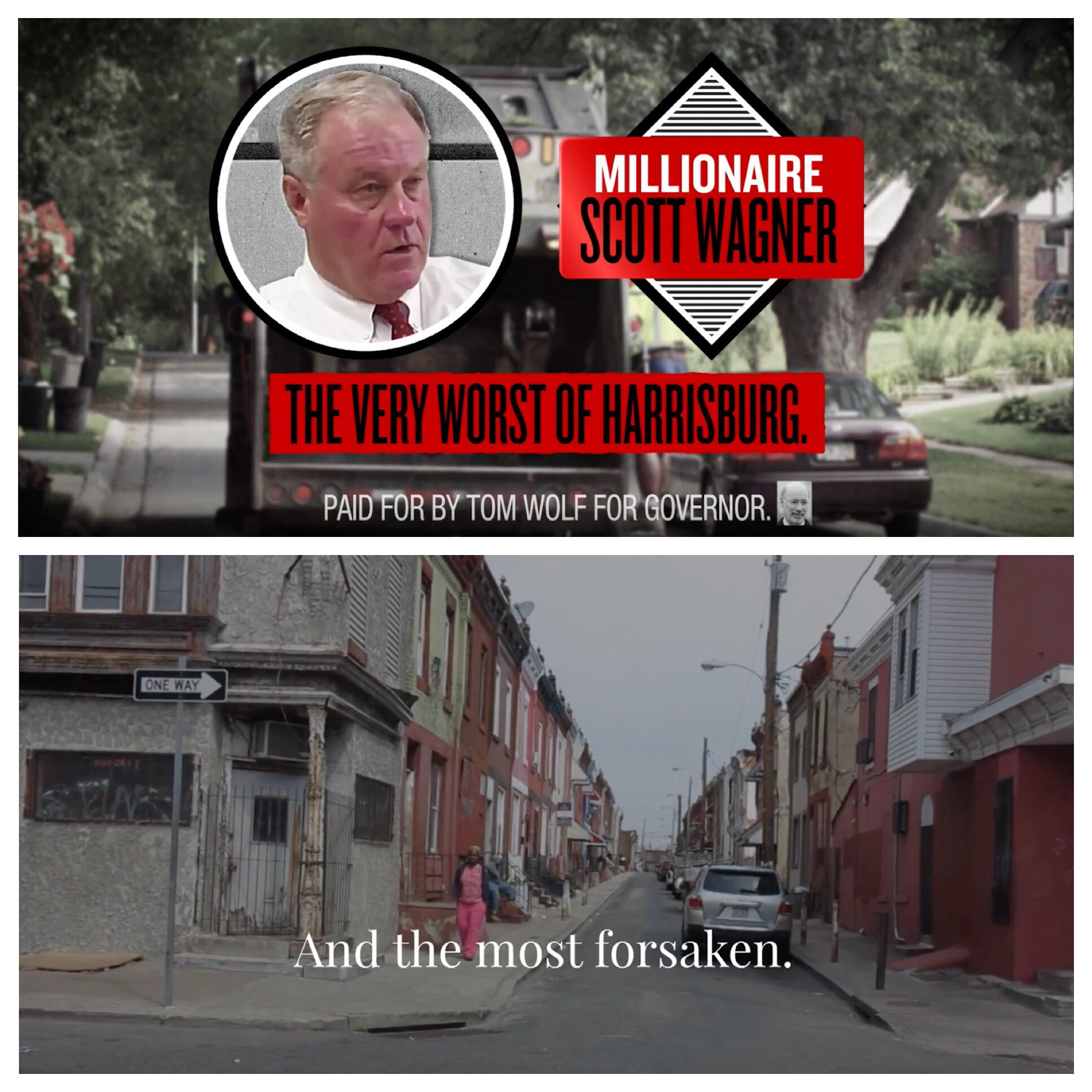 Another round of ads staying on the same message.

For months, Democratic Gov. Tom Wolf has criticized GOP challenger Scott Wagner over not releasing his tax returns and his business practices. As of late, Wagner has made a significant push to appeal to voters in Philadelphia and believes that Wolf has taken their vote for granted.

The two latest television ads from both campaigns harp on these talking points.

Wagner’s 30 second television ad, “Ruth” shows Wagner sitting down with a woman from North Philadelphia as she explains her dissatisfaction with the Democratic Party.

“People boast about it being a powerful Democratic town,” the woman says of Philadelphia in the ad. “The enemy of the community that I love have been Democrats.”

“Tom Wolf and members of the Democratic Party have had control of our cities for long enough – things have only gotten worse under their leadership,” said Andrew Romeo, Wagner for Governor campaign spokesman. “This ad will show voters in urban communities that Scott is passionate about the problems they face and can offer them an alternative to the status-quo.”

This is the second consecutive ad the Wagner campaign has released in an effort of reaching voters in Pennsylvania’s urban communities.

The Wolf campaign thinks the GOP candidates policies would hurt communities all across Pennsylvania.

“Scott Wagner once suggested cutting Philadelphia off from the rest of Pennsylvania, but now he’s claiming to be the best leader for the city,” said Karissa Hand, Wolf’s campaign Deputy Communications Director. “The truth is that Wagner is a typical Harrisburg politician who is lying out of political desperation. Wagner would take Pennsylvania backwards by restricting access to quality, affordable health care, gutting education funding, and taxing seniors’ retirement accounts.”

In the past week, both candidates have opened campaign offices in Philadelphia.

The Wolf campaign’s newest thirty second spot, “Truck” paints Wagner as putting his business first while governing in hopes of enriching himself.

“Thanks to taxpayer contracts with the government, Wagner’s picked up millions for himself, but as Governor, Wagner says he won’t put his business in a blind trust and he refuses to release his taxes,” the voiceover says in the ad.

“It’s clear that he only wants to be governor to enrich himself,” Hand said. “Wagner is refusing to place his assets into a blind trust if elected governor, despite his business relying heavily on government contracts. He owes it to the people of Pennsylvania to stop hiding and release his tax returns immediately.”

The Wagner campaign refuted this claim and fired back accusing the sitting Governor of being beholden to special interests.

“As Scott has stated numerous times, all Penn Waste’s contracts are awarded to the lowest bidder and he will not have any conflicts of interest as governor,” Romeo said. “Governor Wolf, on the other hand, has vetoed bills that would have combated the opioid epidemic and put more money in the classroom because he is owned by his million dollar special interest donors.”

This article has been updated to correct the spelling of Wolf’s campaign Deputy Communications Director.