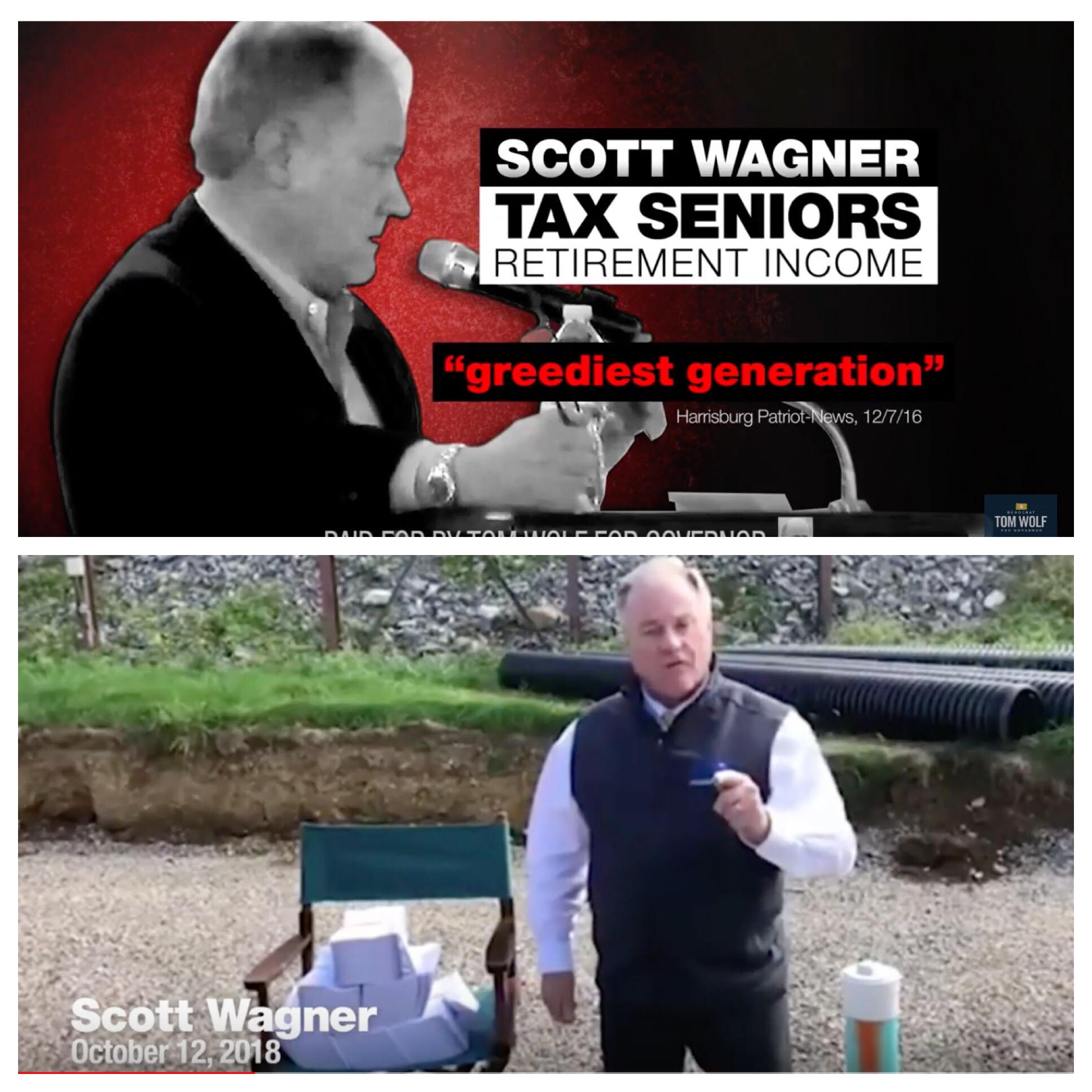 Putting his opponent in the spotlight.

Gov. Tom Wolf’s newest round of attack ads uses various notable video clips of his Republican challenger, Scott Wagner that have been used frequently cited by the incumbent’s campaign.

Wolf’s thirty second television ad, “Spikes” begins by highlighting Wagner’s recent Facebook Live video in which the GOP candidate said he was going to “stomp all over” the face of Wolf with “golf spikes” on. Wagner later took down that video and apologized, saying the words were not meant to be taken literally. The latter half of the ad takes a snippet from an NBC10 Philadelphia story of Wagner attempting to take the camera and cell phone away from a man working for a Democratic super-PAC filming the state Senator giving a speech at a private event in York.

“Well Governor Wolf, let me tell you between now and November 6th, you better put a catcher’s mask on your face, because I’m going to stomp all over your face with golf,” Wagner says in the first 10 seconds of the ad.

The Wolf campaign’s message displayed in the ad during the transition between clips was that, “the behavior is nothing new for Scott Wagner.”

“Scott Wagner’s despicable rant in which he threatened physical violence against Governor Wolf is part of an unfortunate pattern of violence and aggression for him,” said Karissa Hand, Wolf’s campaign Deputy Communications Director. “Scott Wagner is unhinged and unfit to be governor.”

The Wagner campaign believes the ad is a distraction from the issues at hand and show Wolf isn’t holding a “comfortable lead.”

“Tom Wolf sure isn’t acting like a guy who has a comfortable lead like his campaign would like you to believe,” said Andrew Romeo, Wagner campaign spokesman. “This race is about lower taxes vs higher taxes.  Wolf is trying to make it about anything else.”

The second ad, “Other Problem” is a 15 second spot using a clip from a Wagner speech in Berks County in Jan. 2016 discussing taxing seniors retirement income.

“The other problem we have is, and this really angers me to a certain degree, we don’t tax retirement income in the state of Pennsylvania,” Wagner says in this ad.

The Wagner campaign believes this ad is misleading and vouches that he is the candidate to champion seniors in the race by advocating for the elimination of property taxes.

“If you watch the full video from Berks it’s clear Scott was directing his anger towards the specific case of two government employees who are making excessive pensions while we are in a pension crisis,” Romeo said. “He never said he wanted to tax all pensions and even noted that he doesn’t have the power to do so. His comments were meant to illustrate the need to reform the overall pension system and move to a 401k for new hires after a certain date. Scott has been adamant on the campaign trail that he will not tax retirement.”

The Wolf campaign has frequently hit Wagner on this issue in multiple television ads throughout the past several months and stands by this message, while reiterating their slogan that their opponent is the “very worst of Harrisburg.”

“Scott Wagner does not support Pennsylvania’s hardworking seniors,” Hand said. “He wants to tax seniors’ retirement accounts and has called them the ‘greediest generation.’”

On Monday, Wagner’s campaign released three new television ads in which their campaign describes as “a statewide television blitz that will continue until election day.”

Yesterday, the GOP candidate debuted a fourth ad this week intending to attack Wolf on school taxes, while he touts being a fighter for seniors.

The thirty second ad, “Auctioneer” displays a message of a number of senior citizens being forced out of their homes due to being unable to keep up with their taxes as he responds to Wolf’s claim about taxing senior retirement income.

“That’s the sound of another home being lost to unpaid school taxes,” Wagner says after the gavel strikes the table, simulating a house being sold by an auctioneer. “I’m Scott Wagner and when I’m governor, I’ll eliminate the school taxes on your home…and I want to be clear, I’ll never tax your retirement.”

The Wagner campaign believes the message is clear in the ad about which candidate will push for lowering taxes.

“The decision facing voters on November 6th  is very simple,” said Campaign Manager Jason High. “If Pennsylvanians want a governor who will try to impose record tax increases and who will refuse to eliminate school property taxes then they should give Tom Wolf four more years. But if they want a Governor who will lower taxes on employers and eliminate school property taxes then Scott Wagner is the only choice in this race.”

The Wolf campaign doesn’t believe the ad to be true and paints Wagner as the candidate who is working for powerful corporations interests.

“Scott Wagner wants to burden middle-class families and seniors by taxing groceries, clothing, and retirements so he can give handouts to corporations and big oil and gas,” Hand said. “He only wants to cut regulations for his own business so he can line his own pockets while his business raises prices for small businesses and consumers.”