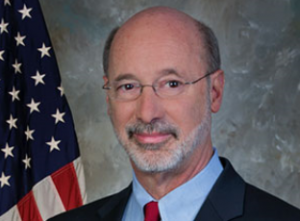 Governor Wolf has named his choice for the next State Treasurer.

Wolf announced Timothy A. Reese as his nominee to fill the vacant position left open by Rob McCord’s sudden resignation for extortion.

“At a time when Treasury needs a steady hand, Tim brings more than two decades of significant finance and business experience,” said Governor Wolf. “Tim is a proven leader with a diverse financial background – as a consultant, an entrepreneur and an investor. His outstanding management experience and fiscal expertise, along with a passion for promoting financial literacy, will help bring stability to the Treasury and refocus the department on its core mission.

“Anyone who knows Tim can attest to his civic engagement,” Governor Wolf continued. “Last year, he was tapped by the U.S. Securities and Exchange Commission (SEC) to serve on its Advisory Board. He has worked closely with the White House to promote entrepreneurism and has led or co-led two investment organizations that are committed to providing funding and financial literacy to entrepreneurs, with an emphasis on minorities, women and veterans.”

“I am honored to have been asked by Governor Wolf to serve the citizens of the Commonwealth,” Reese said. “I look forward to getting started right away and lending my expertise to the Treasury and the Commonwealth.”

The Governor’s office provided the following background on Mr. Reese:

Mr. Reese, age 51, brings more than 20 years of experience as a successful businessman and investor. He is an investor in both venture and private equity deals within the healthcare, pharmaceutical, and information technology sectors across start-ups, early-stage and public companies. A serial entrepreneur, he has founded six companies himself, achieving an average return on investment (ROI) of 7x in exits.

In 2012, Mr. Reese launched National Minority Angel Network to focus on investing in women, minority, and veteran-owned companies. The founding partners have collectively invested $2.4 million in 14 ventures and achieved exit values of $320 million for investors in those ventures.

Mr. Reese currently serves on the Board of Advisors for the U.S. Securities & Exchange Commission. He has consulted with early to growth stage companies and reviewed investment opportunities for venture capital firms, private equity, Family Offices, and angel networks.

He resides in Montgomery County with his wife, Sara, and three sons.