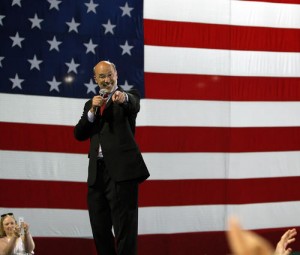 The stage is set.

The Wolf Transition Team released the schedule for January 20th, 2015 the day the Governor-Elect is set to be inaugurated.

In addition to the swearing-in of Tom Wolf and Mike Stack, they have also planned an art exhibit, an open house in the Governor’s Mansion and an after-party.

“We’re pleased to invite Pennsylvanians from throughout the commonwealth to help celebrate the inauguration of the 47th Governor of Pennsylvania Tom Wolf,” said Wolf Inaugural Committee honorary chair Governor Ed Rendell. “We have a number of exciting events scheduled to make inauguration day memorable for Pennsylvanians who join Governor-elect Wolf for this momentous occasion.”

The full schedule is included below:

Event will be live streamed.

Open to the public. Tickets required.

Tickets to this event are free.

Inaugural Exhibit of the Pennsylvania Arts and Children’s Program

The State Museum of Pennsylvania

Open to the public. No tickets required.

Open House Hosted By The Governor and First Lady

Open to the public. No tickets required.

Shuttles to Governor’s Residence will be provided.

Inaugural Celebration of the 47th Governor of Pennsylvania Tom Wolf