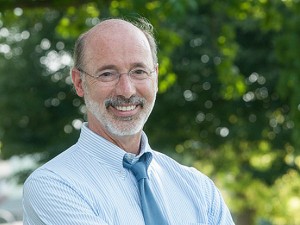 Update: The Wolf campaign released the membership list for all their review teams.

Governor-Elect Tom Wolf is casting out a wide policy net.

Wolf announced today that he is setting up review teams that will study several state agencies and commissions as well as policy areas. The goal is a better understanding of all of these different subjects.

“It is important that I understand the issues and challenges my administration will face,” Wolf stated. “Today I am pleased to announce this outstanding group of individuals who will review state agencies and provide insight into issues that will allow me to have the knowledge necessary to hit the ground running on January 20.”

The Wolf transition team provided the heads of all the review teams as well as their backgrounds. That information is included below:

Everette James currently serves as the director of the Health Policy Institute at the University of Pittsburgh. Previously, James served as the secretary of the Pennsylvania Department of Health from 2008 to 2010.

Russell Redding has served as the dean of the School of Agriculture and Environmental Sciences at Delaware Valley College since February 2011. Previously, Redding was the secretary of the Pennsylvania Department of Agriculture.

Hilary Hunt is a nationally recognized education consultant with more than 15 years of experience in the field of financial education. Under Governor Ed Rendell, Hunt served as director of the Pennsylvania Office of Financial Education from its inception in 2004 until 2009.

Reverend Dr. Damone Jones serves as the senior pastor at Bible Way Baptist Church in Philadelphia. Dr. Jones devotes much of his time to working with at-risk youth and reducing crime in the community.

David Spurgeon is a deputy district attorney with the Allegheny County Office of the District Attorney. Spurgeon is also an adjunct professor at the Duquesne University School of Law and at Point Park University.

Caren Glotfelty is the executive director is the Allegheny County Parks Foundation.  She previously served as the director of environmental programs at Heinz Endowments. Glotfelty also was the first deputy secretary of water management for the Department of Environmental Resources under Governor Robert Casey.

Bob Donchez is the mayor of the City of Bethlehem. He is a retired educator who taught American Government for 35 years in the Allentown School District. Previously, Donchez served on Northampton County’s Drug and Alcohol Commission.

Rob Wonderling is the president and CEO of the Greater Philadelphia Chamber of Commerce. From 2002 to 2009, Wonderling served in the Pennsylvania State Senate.

Christina Simeone is the deputy director of the Kleinman Energy Policy Center at University of Pennsylvania. Previously, Simeone was senior member of the PennFuture Energy Center staff.

Robb Fox is a partner at the law firm Manko, Gold, Katcher & Fox LLP. Fox is known nationally for his work under the federal Superfund law, including handling many high-profile Superfund matters

Pedro Rivera is the superintendent of the School District of Lancaster. Prior to his time in Lancaster, Rivera spent 13 years in the Philadelphia Public Schools in various capacities, including principal, assistant principal, classroom teacher, and human resources director.

Dr. Rachel Levine is a professor of pediatrics and psychiatry at the Penn State College of Medicine and vice chair for Clinical Affairs in the Department of Pediatrics.

Dr. Karen Hacker is the director of the Allegheny County Health Department. Prior to her appointment here, Dr. Hacker was executive director of the Institute for Community Health. She also served as an associate professor in Medicine at Harvard Medical School and School of Public Health.

Connie Williams is chair of the Philadelphia Museum of Art’s Board of Trustees. From 2001 through 2008, she was a Pennsylvania State Senator, and from 1997 to 2001, she served as a member of the Pennsylvania House of Representatives.

Leslie Anne Miller is a Philadelphia attorney. She also serves as an advisor to Mayor Michael Nutter. Previously, she was general counsel to Governor Ed Rendell and was acting president of the Kimmel Center for the Performing Arts.

Matthew Paules is the business manager and financial secretary of the International Brotherhood of Electrical Workers Local 229 in York. Paules is also the secretary of Local 229’s five-year Pennsylvania State Registered Joint Apprenticeship and Training program.

Frank Sullivan served as the deputy director of the Joint Program Integration Office in Kabul, Afghanistan. Sullivan is also a retired brigadier general in the United States Air Force and retired commander in the Pennsylvania National Guard.

Margaret M. O’Sullivan is the executive director of Nationalities Service Center in Philadelphia. O’Sullivan had a 15-year tenure with the American Red Cross of Southeastern Pennsylvania, where she held several positions, including chief program officer and interim chief executive officer.

Brent Alderfer is CEO and co-founder of Community Energy, a clean energy company. Alderfer served as a former Colorado Public Utility commissioner and is well known in the renewable energy industry for his leadership in markets for new and renewable energy technologies.

Michael Rashid recently retired after serving as the chief executive officer of AmeriHealth Caritas since 2010. Rashid worked with the company for 20 years.

Rick Gray was elected mayor of Lancaster in 2005. He also serves as first vice chair of the Pennsylvania Municipal League.

Scott Cooper is an attorney in Harrisburg and an active member of the Pennsylvania Association for Justice (PAJ). He is also chairman of PAJ’s Legislative Policy Committee and serves on both the Executive Committee and Board of Governors.

Pedro Cortes served as secretary of the Commonwealth under Governor Ed Rendell from 2003 to 2010.

Rick Vilello is the mayor of the City of Lock Haven. He has owned Vilello Building Products since 1997.

Kathy Dahlkemper took office as Erie County executive on January 7, 2014. Previously, Kathy served in the U.S. House of Representatives, where she held positions on the Agriculture, Science and Technology, and Small Business Committees.

Eric Menzer currently serves as the president and general manager of the York Revolution. Previously, Menzer was senior vice president at Wagman Construction, and before that, he served as director of economic development for the City of York.