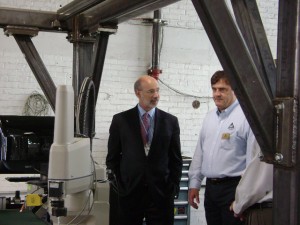 It’s a good time to be Tom Wolf.

At least that’s what the polls say. The latest surveys have the Democratic gubernatorial nominee up 25 and 30 points over incumbent Tom Corbett.

Yet the last few weeks, Wolf has spent his time touring PA businesses instead of holding large campaign rallies.

There are two main reasons for this, one obvious to all political observers and the other apparent only once you witness him take part in one of these events.

First, appearing in local businesses is great campaign optics as it reminds voters of the candidate’s manufacturing background and doesn’t reek at all of politics.

Second, is that Wolf is truly in his element during these excursions and clearly enjoys them. One gets the sense he’d rather discuss the issues of distribution and supply chains than the latest polls.

Wolf was shown several floors of the building by the heads of the company. In two instances he ran into some employees. One was from New Jersey and said he’d vote for him if could but would have to wait until he ran for President (a suggestion Wolf laughed off).

The second occasion took place on a stairwell between floors. Two men emerged from the door at the exact same time Wolf reached the landing. “Hey, Tom Wolf” they said simultaneously (those ads apparently worked). One of the men who works with boxes recommended his company for Wolf’s cabinets and gave the candidate his card. 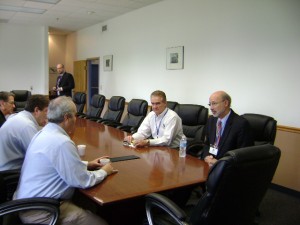 At the end of the tour, Wolf stop to take some questions from the handful of reporters who’d accompanied him. I asked the front-runner about his large polling lead.

“I don’t know what that means, I’ve never done this before,” Wolf responded. “What’s interesting about this for me is that I can actually come in here and talk about interesting things with folks like this. We’ve actually got to be talking about how we make sure that manufacturing works. I was here to learn. Because I’m campaigning, they allow me to come in. So that’s what I like about a thirty point lead.”

Are you concerned about the attack ads that are sure to emerge over the next two months, I followed up.

“I am who I am,” Wolf said. “I grew up in York County, I’ve never been in politics before, this is the first time I’m doing this. If I think the people continue to like me, I’ll be the next Governor if not someone else will be.”

As you can see, his answers were just a variation of the humble stock response he has given probably thousands of times by now. Yet hidden in that answer is a peek into why the businessman took the leap into the political realm.

Running a successful business is a challenge, but serving as Governor and making sure the business of the entire state runs well is the challenge of a lifetime. It’s also a challenge Tom Wolf seems eager to take on.